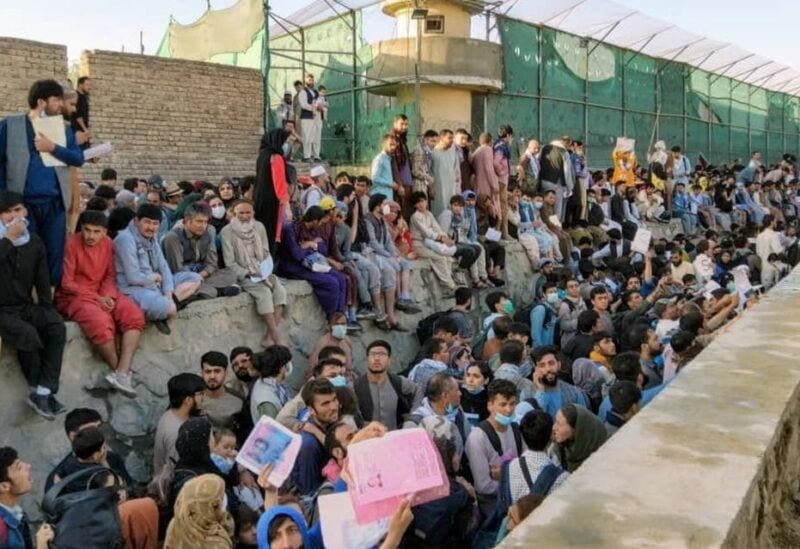 Crowds of people wait outside the airport in Kabul, Afghanistan August 25, 2021 in this picture obtained from social media. (Reuters)

EU governments must push ahead with a European rapid reaction force to be better prepared for future crises such as in Afghanistan, the EU’s foreign policy chief Josep Borrell said.

In an interview published on Monday, Borrell told Italian paper Il Corriere della Sera the short-notice deployment of US troops to Afghanistan as security deteriorated showed the EU needed to accelerate efforts to build a common defense policy.

“We need to draw lessons from this experience … as Europeans we have not been able to send 6,000 soldiers around the Kabul airport to secure the area. The US has been, we haven’t,” he said.

Borrell said the 27-member EU should have a “initial entry force” of 5,000 soldiers. “We need to be able to act quickly.”

In May, 14 EU countries including Germany and France proposed such a force, possibly with ships and aircraft, to help democratic foreign governments needing urgent help.

First discussed in 1999 in connection with the Kosovo war, a joint system of battlegroups of 1,500 personnel each was set up in 2007 to respond to crises, but they have not been used because EU governments disagreed on how and when to deploy them.

Borrell said it was time to be flexible, citing agreements made quickly to cope with the financial crisis as an example of how the EU could overcome restrictions in the deployment of military operations laid down in its constitutional treaties.

“We can work in many different ways,” he said.

Britain, long a reluctant EU member, was instrumental in the creation of the battlegroups in the 2000s but did not approve deployment as domestic opposition grew to anything that might resemble the creation of an EU army. With Britain’s departure from the bloc, the EU executive hopes the idea can be revived.

But obstacles remain, including the lack a common defense culture among the various EU members and differences over which countries should be given priority for deployment.