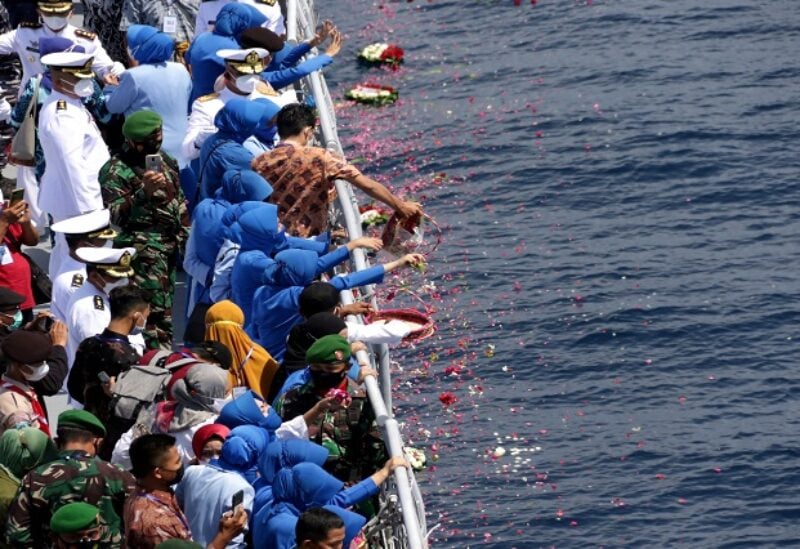 Families and colleagues of the sunken KRI Nanggala-402 submarine's crew members throw flowers and petals to pay tribute during a visit at the site of its last reported dive, on the deck of Indonesian Navy's KRI Dr. Soeharso, in the northern waters off the island of Bali, Indonesia April 30, 2021, in this photo taken by Antara Foto/Budi Candra Setya/via Reuters

Crying out the names of their beloved ones as they scattered flower petals into the ocean, families of the 53 Indonesian navy crew members who perished in a sunken submarine paid tribute at a ceremony at sea on Friday.

Servicemen wearing white navy uniforms and holding ceremonial swords saluted in unison on the deck of the multi-purpose hospital ship KRI Dr. Soeharso, in a mark of respect to the victims at the location where the submarine was last spotted.

The KRI Nanggala-402 was found at a depth of around 840 metres (2,756 ft) on Sunday, broken into at least 3 parts, four days after it lost contact while preparing to conduct a torpedo drill.

Nearly 150 family members attended the memorial aboard the ship. Some cried and tried to console each other.

Retrieval operations are still ongoing for German-built submarine, with help from international search teams, as authorities struggle to figure out how to lift the wreckage.

Navy Chief of Staff Yudo Margono told reporters that “the position of the KRI Nanggala has remained in the area with no movement detected.”

“We are looking at experiences of other countries, such as lifting using special ropes or using air balloons. We still don’t know which approach to use,” he added.

Experts have said bringing the submarine to the surface will be a huge challenge requiring specialized salvage equipment.

The Nanggala was one of five submarines operated by Indonesia – 2 German-built Type 209s and 3 newer South Korean vessels.

The military has been seeking to modernize its defense capabilities but some of its equipment is old and there have been deadly accidents in recent years.