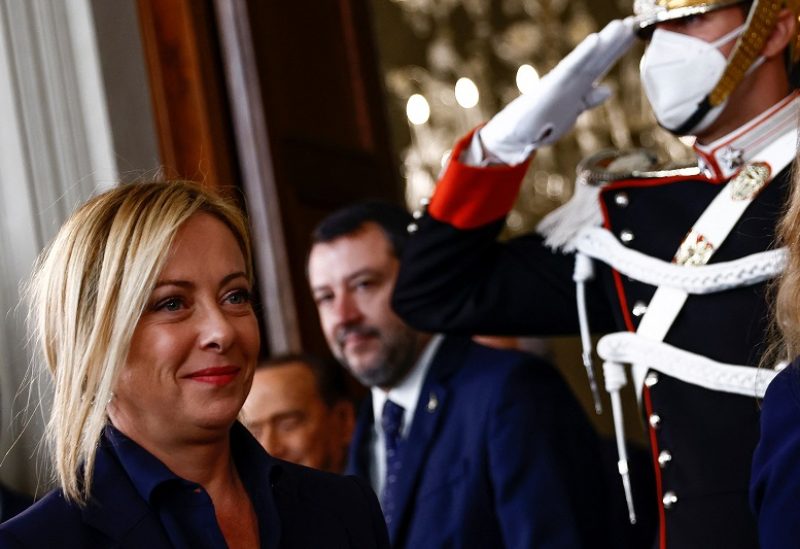 Brothers of Italy leader Giorgia Meloni looks on as she walks following a meeting with Italian President Sergio Mattarella at the Quirinale Palace in Rome, Italy October 21, 2022. REUTERS/Yara Nardi

Becoming the first woman to head a government in Italy, Far-right leader Giorgia Meloni was set to be named Italian prime minister on Friday after her party’s historic election win.
Her post-fascist Brothers of Italy party — Euroskeptic and anti-immigration — won September 25 legislative polls but needs outside support to form a government.
Following two days of cross-party talks the 45-year-old from Rome is now all but certain to be asked to form a government and become the country’s first woman prime minister.
“We are ready to give Italy a government which will face the emergencies and the challenges of our time with awareness and competence,” Meloni tweeted late Thursday.
Her Brothers of Italy party won 26 percent of the vote last month, compared to eight and nine percent respectively for her allies Forza Italia and the far-right League.
Her appointment would be a historic change for the eurozone’s third largest economy and for Brothers of Italy, which has never been in government.
Tradition dictates that President Sergio Mattarella will only name her after holding formal talks with all parties in parliament.
On Friday, Meloni joined representatives of her coalition to meet Mattarella, with speculation she could be asked to form a government as early as this afternoon.
If she confirms she is able to govern with her allies, she could be sworn in with her ministers over the weekend, with a vote of confidence in parliament next week.
The consultations to cobble a government have been overshadowed by disagreements over Meloni’s ardent support for Ukraine since the Russian invasion with her two would-be coalition partners both considered close to Moscow.
A recording was leaked in which Italy’s former prime minister Silvio Berlusconi — who heads Forza Italia — talks about his warm ties with Moscow and appeared to blame the war in Ukraine on Ukrainian President Volodymyr Zelensky.
Her other coalition partner, Matteo Salvini leader of the League party, is a long-time fan of Russian President Vladimir Putin and has criticized Western sanctions on Russia.
Despite her Euroskeptic stance, Meloni has been firm about her support for Ukraine, in line with the rest of the European Union and the United States.
“I intend to lead a government with a clear and unequivocal foreign policy line,” she has said. “Italy is fully, and with its head held high, part of Europe and the Atlantic Alliance.”
“Anyone who does not agree with this cornerstone will not be able to be part of the government, even at the cost of not forming a government,” Meloni has warned.