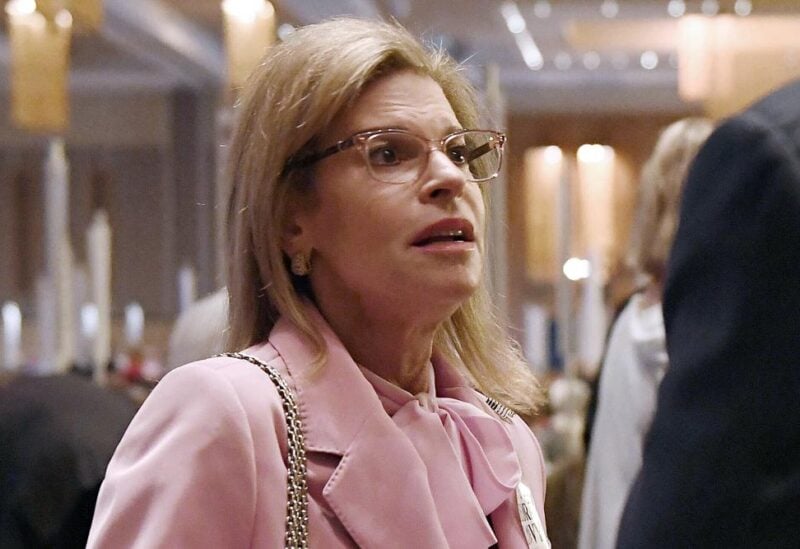 Republican candidate for U.S. Senate Leora Levy talks to delegates at the State Republican Convention, May 7, 2022, in Mashantucket, Conn. Republicans have found success in Democratic strongholds such as Maryland and Massachusetts when they have run moderates who could appeal to voters in both parties. (AP Photo/Jessica Hill, File)

Republicans have had success running moderate candidates who could win over supporters from both parties in Democratic strongholds like Maryland and Massachusetts. Republicans had anticipated that tactic would succeed once more in light of Democrats’ difficulties this election season.

However, supporters of the previous president Donald Trump were nominated by Republicans in a number of Democratic states, including Connecticut and Maryland, increasing the odds against the GOP winning those states’ general elections. Next month, GOP supporters in Massachusetts will have their own test as they choose between a Trump-backed conservative and a more moderate Republican as the party’s gubernatorial nominee.

“It can’t continue,” said former Connecticut U.S. Rep. Christopher Shays, a moderate Republican and Trump critic, referring to the GOP choosing pro-Trump candidates. “One of the things that will happen is that a lot of the Trump candidates who won the primary will lose the general election. And there are a lot of unhappy Republicans who hold office now who believe that the Senate now is in jeopardy of staying Democratic.”

Trump’s influence was on full display earlier this month when his last-minute endorsement helped propel Leora Levy, a member of the Republican National Committee who opposes abortion rights, to victory in a Republican U.S. Senate primary in Connecticut over the party’s endorsed candidate, former House Minority Leader Themis Klarides. Klarides supports abortion rights and said she didn’t vote for Trump in 2020.

“Sad day for CT …,” tweeted Brenda Kupchick, the Republican first selectwoman of Fairfield and a former state representative, after the Aug. 9 race was called for Levy. Days earlier, after Trump endorsed Levy on speakerphone at a GOP picnic, Kupchick tweeted, “How is that helpful in the general election in CT?”

Kupchick’s tweets sparked criticism in both GOP camps. Trump supporters accused Klarides of not being a “true conservative.” Moderate Republicans predicted that Levy’s nomination ensured Democratic U.S. Sen. Richard Blumenthal would sail to victory in November, despite a Quinnipiac poll in May registering his lowest job approval since he took office in 2011.

The last Republican to represent Connecticut in the U.S. Senate was Lowell P. Weicker Jr., who served from 1971 to 1989, though Connecticut has elected a moderate Republican governor as recently as 2006, with M. Jodi Rell.

Levy, who has never before served in elective office, contends her message of controlling high inflation and energy prices, stopping “government intrusion between parent and child” and addressing crime will resonate with a wide range of voters.

The Democratic nominees in Maryland and Massachusetts are viewed as strong favorites to flip the governor’s mansions in those states.

Trump’s backing has propelled his candidates to victory in top races in battleground states, too, boosting Democrats’ optimism of winning the general election. In Arizona, former TV news anchor Kari Lake, who has said she would not have certified President Joe Biden’s 2020 victory, defeated lawyer and businesswoman Karrin Taylor Robson, who had been endorsed by former Vice President Mike Pence and outgoing GOP Gov. Doug Ducey. In Wisconsin, Trump-backed businessman Tim Michels beat former Lt. Gov. Rebecca Kleefisch, who had been endorsed by Pence and the state party. Both Michels and Kleefisch, however, falsely claimed the 2020 presidential election was rigged.

In Connecticut, Levy’s nomination is already being used as a rallying cry for Democrats, who contend she’s out of the mainstream for a state where Republicans are outnumbered by unaffiliated voters and by Democrats. Aside from opposing abortion rights — reversing her position years ago of supporting abortion rights — Levy has spoken out against job-related COVID-19 vaccine requirements and transgender rights. Levy effusively thanked the former president during her acceptance speech, promising, “I will not let you down.”

A day after the primary, Blumenthal’s campaign sent out a fundraising message that warned, “The primary results are in, and I’m officially facing off against Trump’s hand-picked candidate in the general election — a radical Republican who will be nothing but a rubber stamp on Mitch McConnell’s disastrous agenda.”

Levy, in turn, has tied Blumenthal to Biden, casting him as a “rubber stamp” for the Democratic president’s “failed policies” as president and blaming Blumenthal for playing a “a key role in creating virtually every challenge our country faces today.”

“Dick Blumenthal wants this election to be a referendum on a President. Donald Trump is not on the ballot in November, but Joe Biden is,” she said in a news release issued after the primary.

Shays, who now lives in Maryland, said he believes an endorsement by Trump is disqualifying. He said he contributed to the campaign of Wes Moore, the Democrat running against Cox in Maryland, and would vote for Blumenthal if he still lived in Connecticut.

“I will vote against anyone who seeks the support of Donald Trump because that tells me so much about their character and what they intend to do if elected. That’s the bottom line to me,” Shays said.

Ben Proto, chair of the Connecticut Republicans, dismissed any suggestion that the primary victory by Levy signaled a political evolution within the state GOP. Rather, he said, the party this year has “candidates across the board who hold different opinions on particular issues.”

But what they have in common, he said, is the goal of getting inflation under control, making Connecticut more affordable, addressing crime and allowing parents to be the “primary stakeholder” in their children’s lives.

“At the end of the day, the issues that are important to the people of the state of Connecticut, we’re pretty solid on,” he said.