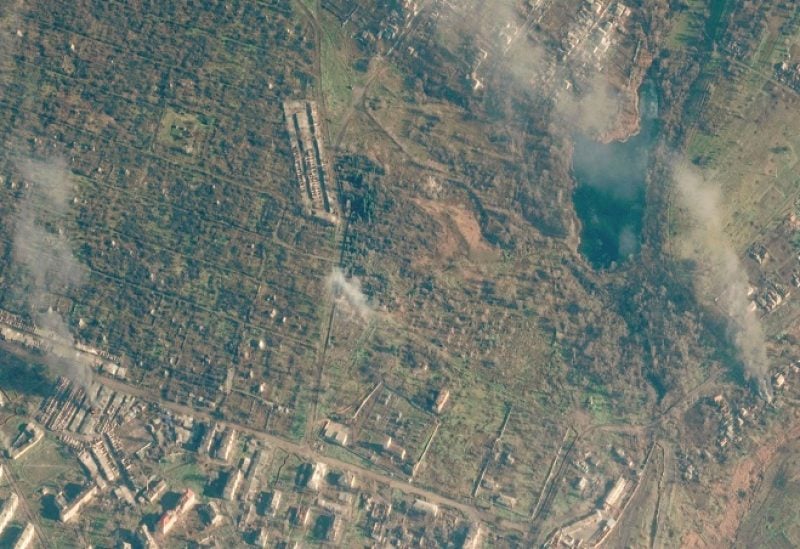 A satellite view shows a smoldering building, in Soledar, Ukraine, January 3, 2023. Satellite image 2023 Maxar Technologies./Handout via REUTERS ATTENTION EDITORS - THIS IMAGE HAS BEEN SUPPLIED BY A THIRD PARTY. MANDATORY CREDIT. NO RESALES. NO ARCHIVES. DO NOT OBSCURE LOGO.

While Moscow announced a new military commander in Ukraine, Ukrainian President Volodymyr Zelensky said Wednesday that fighting was still raging in a key eastern frontline city that a Russian mercenary group earlier said it controlled.
The fate of Soledar in eastern Ukraine was uncertain after Russian group Wagner claimed it controlled the gateway town — but the Kremlin cautioned against declaring victory prematurely.
And in his daily address, Zelensky insisted the front was “holding.”
“The terrorist state and its propagandists are trying to pretend” to have achieved some successes in Soledar, Zelensky said, “but the fighting continues.”
Both Moscow and Kyiv have said the battle for Soledar has been long and brutal. If it did fall to Moscow’s forces, that would mark Russia’s first significant territorial gain in Ukraine in months.
The war-battered salt mining town in the eastern Donetsk region lies some 15 kilometers (nine miles) from Bakhmut, a larger urban hub that Russia has been trying to seize.
The head of Wagner Group, Yevgeny Prigozhin, claimed Wednesday that his forces had “taken control of the whole territory of Soledar” while “urban battles” were fought in the city center.
Russian state news agency RIA Novosti published a photo it said had been taken in the salt mines of Soledar showing Prigozhin with armed fighters.
The Ukrainian military said the pictures were taken elsewhere.
And the Russian defense ministry urged caution, saying it was best to wait for “official announcements.”
US Defense Secretary Lloyd Austin told reporters on Wednesday that the United States could not confirm accounts that Soledar had fallen and the city had “gone back and forth a number of times, and it really is some pretty brutal fighting.”
On the road between Bakhmut and the city of Sloviansk further west, a wounded Ukrainian soldier waiting to be evacuated said fighting in Soledar was the toughest his brigade had seen.
But “nobody is planning to give up the city,” the 27-year-old, who goes by the nom de guerre Bober (Beaver), told AFP.

Moscow, meanwhile, announced it had put army chief of staff Valery Gerasimov in charge of the Ukraine conflict.
Sergei Surovikin — the commander of Russia’s forces in Ukraine for the past three months — will become Gerasimov’s deputy, the defense ministry announced Wednesday.
Analysts say that the competing statements around Soledar point to in-fighting among the Russian forces, who have been trying to capture the whole of Ukraine’s eastern Donbas region since failing to take Kyiv last year.
Ukrainian presidential adviser Mykhaylo Podolyak told AFP he believed Russia was suffering “enormous” losses in the battle for the town but conceded that the Ukrainian side was also seeing casualties.
The fighting there and in neighboring Bakhmut is the “bloodiest” of the war so far, he said.
Earlier this week, Zelensky said Soledar had been flattened by fighting and that everything was “completely destroyed.”
On Wednesday, the president also said he had visited the western Ukrainian city of Lviv, near the border with EU member Poland, for talks on coordination and “border protection” — including the situation on Ukraine’s northern frontier with Belarus.
A close ally of Moscow, Belarus President Alexander Lukashenko allowed Russian troops to use his country as a launchpad for their invasion in February.

After Belarus announced the establishment of a joint force with Moscow in the autumn, there had been fears of a frontline opening in the north. The fighting is currently concentrated in the east and south.
In the southern region of Kherson on Wednesday, an exploding Russian shell started a fire at a maternity ward.
“A powerful blast wave knocked out windows in the children’s ward and damaged one of the doctors’ offices,” regional governor Yaroslav Yanushevych said, adding that one employee was injured.
In the east, Russian strikes targeted Ukraine’s second city Kharkiv on Tuesday, in the wake of a surprise visit by German Foreign Minister Annalena Baerbock.
Baerbock vowed further German support for Kyiv, but her Ukrainian counterpart Dmytro Kuleba, who accompanied her, said Berlin’s refusal to send Kyiv battle tanks was costing lives.
Last week, French President Emmanuel Macron promised Zelensky that Paris would send French-made light tanks to Kyiv — making France the first Western country to deliver tanks to Ukraine, and putting pressure on Germany.
Separately, Poland’s President Andrzej Duda said Wednesday that Warsaw was ready to send Leopard tanks to Ukraine, but “within an international coalition.”