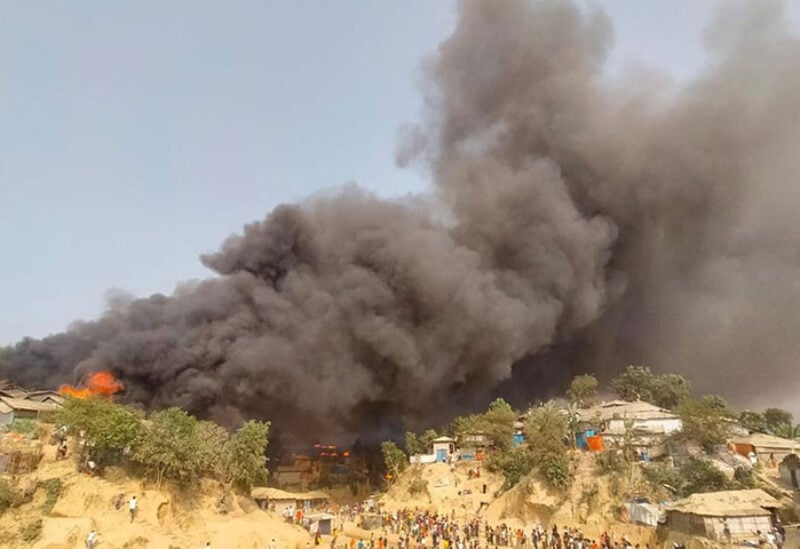 A massive fire broke out in Rohingya Muslim refugee camps in Bangladesh on Monday making large plumes of black.

There are just under one million refugees in the camps around the town of Cox’s Bazar, on the south-eastern coast of Bangladesh.

UNICEF said that it had mobilized resources to deal with the crisis, working with local fire services and volunteers.

The inferno appears to have spread across several blocks and damaged the Kutupalong camp — the world’s largest refugee camp — and the Balukhali camp.

The Kutupalong camp is home to an estimated 626,500 Rohingya refugees, said the UN office for coordination of humanitarian affairs. They live in extremely congested conditions, housed in ramshackle huts.

The extent of injuries has not been confirmed by authorities.

An activist at the scene of the fire told The National at least one person had died, but the toll is expected to rise.

Fire and medical personnel, including a number of volunteers, responded to the incident and evacuated residents.

The refugees, predominately Rohingya Muslims, were seen in photos posted on social media clutching at belongings they were able to salvage before fleeing the fire.

A large number of shelters appeared to be destroyed in the blaze, raising questions about where the refugees will now be housed.

In early March, Bangladesh moved nearly 4,000 Rohingya refugees to a remote Bay of Bengal island, despite complaints from rights groups concerned about the site’s vulnerability to storms and flooding.

The government dismissed safety concerns over the island, citing the building of flood defenses as well as housing for 100,000 people, hospitals and cyclone centers.

In August 2017, after a military crackdown in Myanmar, an estimated 750,000 Rohingya Muslims, a minority group in Myanmar, fled to neighboring Bangladesh.