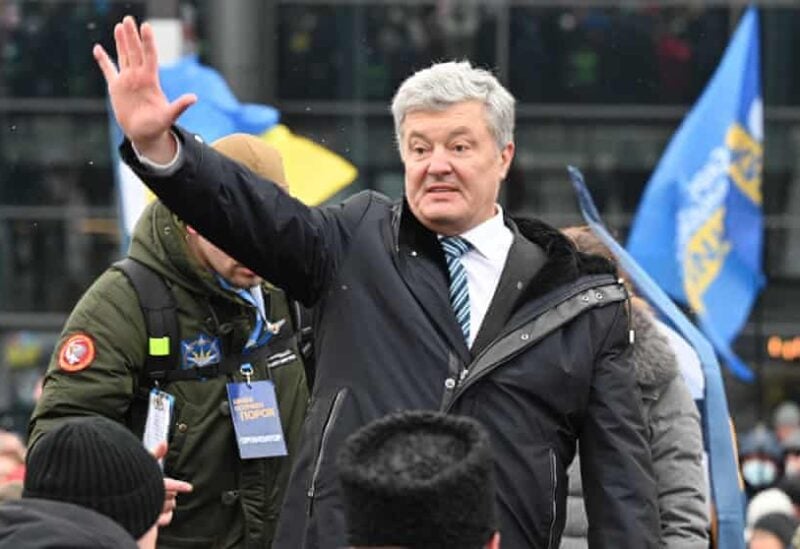 Petro Poroshenko, Ukraine’s former president, arrived in Kyiv on Monday to face treason accusations in a case he claims was fabricated by associates of his successor, Volodymyr Zelenskiy.

Poroshenko accused border guards of stealing his passport after a brief standoff at border control after landing on a flight from Warsaw. Outside the airport, he was greeted by hundreds of shouting and flag-waving fans.

Poroshenko’s homecoming sets up a clash with President Zelenskiy’s cabinet, which opponents say is an ill-advised diversion as Ukraine prepared for a possible Russian military invasion and seeks help from Western friends.

Western diplomats called for political unity in Ukraine before the arrival of Poroshenko, who was president from 2014 until 2019.

Poroshenko, 56, is being investigated for alleged treason linked to the financing of Russian-backed separatist fighters through illegal coal sales in 2014-15. He could face 15 years in prison if convicted. His party accused Zelenskiy of a reckless attempt to silence political opposition.

Zelenskiy’s administration says the prosecutors and judiciary are independent and accuses Poroshenko of thinking he is above the law.

“We are not here to protect Poroshenko, but to unite and protect Ukraine,” Poroshenko told the crowd, before heading to the Pechersk court in central Kyiv for a hearing into his case, as supporters chanted outside the building.

During a break in the court session, he told the crowd: “The authorities are confused, weak, and instead of fighting (Russian President Vladimir) Putin, they are trying to fight us.”

Tetiana Sapyan, a spokeswoman for the State Bureau of Investigations (DBR), told a separate briefing that the DBR was apolitical.

On Friday, Zelenskiy’s chief of staff batted away suggestions that Zelenskiy was behaving like Viktor Yanukovich, a former president who was backed by Russia and whose political rival Yulia Tymoshenko was jailed in a case that Western countries widely condemned as politicised.

The row has raged as Ukraine tries to rally Western support in its standoff with Moscow after sounding the alarm about a build-up of tens of thousands of Russian troops near its borders.

A confectionary tycoon, Poroshenko was elected as head of a pro-Western government after the Maidan street protests that ousted Yanukovich in 2014.

Relations between Ukraine and Russia collapsed in 2014 after Russia annexed the Crimea peninsula and backed separatist fighters in a conflict in eastern Ukraine.

Zelenskiy trounced Poroshenko in an election in 2019. He ran on a ticket to tackle corruption and curb the influence of oligarchs in the former Soviet republic.

Prosecutors asked a Ukrainian court in December to arrest Poroshenko, with the possibility of bail set at 1 billion hryvnia ($37 million).