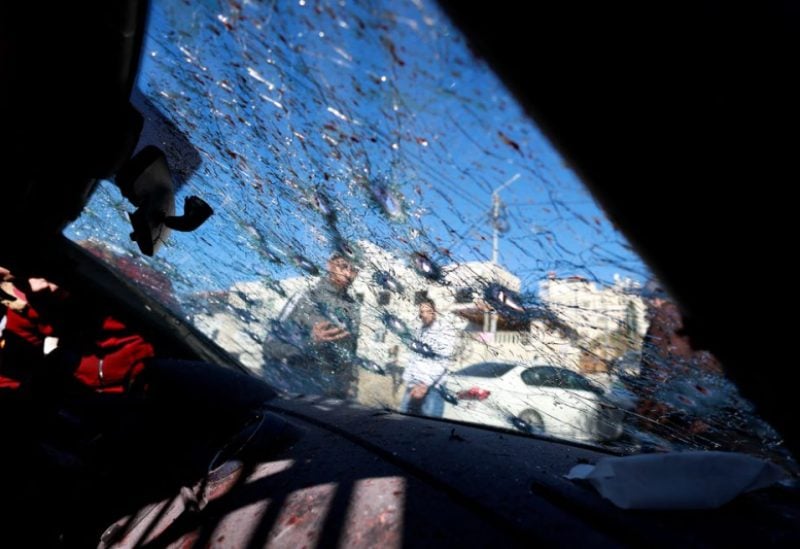 People inspect the scene where three Palestinian gunmen were killed by Israeli forces, in Nablus in the Israeli-occupied West Bank February 8, 2022. REUTERS/Mohamad Torokman

An Israeli raid early Tuesday, led to the death of four Palestinians and the injury of 20 others, in the occupied West Bank, the Palestinian Health Ministry said.
forces“There are three dead and 19 wounded, three of them seriously, by Israeli fire in Nablus,” the ministry said in a brief statement referring to a city in the occupied West Bank.
The ministry later reported that another Palestinian was killed by Israeli fire, this time in Ramallah, home to the headquarters of Mahmoud Abbas’ Palestinian Authority in the central West Bank.
The Israeli army did not immediately comment on the toll, but confirmed in a brief message to the press that they had conducted a night operation in Nablus.
Palestinian President Mahmoud Abbas is establishing “urgent contacts in order to stop this aggression against our people,” his spokesman Nabil Abu Rudeinah said in a statement.
In recent weeks, a group of young Palestinian fighters — some affiliated with mainstream groups such as Fatah, Hamas and Islamic Jihad — have carried out anti-Israeli operations from Nablus, a large city in the northern occupied West Bank.
The new group, called “Areen Al-Ossoud” — or “The Lions’ Den” in English — claimed responsibility for a deadly attack on an Israeli soldier two weeks ago in the occupied West Bank.
Late leader Ibrahim Al-Nabulsi, nicknamed “The Lion of Nablus,” was known for galvanizing the youth before he was shot dead by Israeli forces in August. He has since become a folk hero to Palestinians on social media.
In the aftermath, the Israeli army tightened its grip on Nablus, setting up controls to identify people leaving the city and constantly scanning the skies above with observation drones.
On Saturday night, a Lions’ Den fighter, Tamer Al-Kilani, was killed in the Old City of Nablus by an “explosion” attributed by the group and the Israeli press to a bomb remotely activated by the Israeli army.
The army did not comment on these claims.
After the operation early Tuesday, the Palestinian Islamic Jihad said in a statement that its “fighters were involved in violent clashes” with Israeli forces in Nablus and threatened Israel with reprisals “against these crimes” there.
Violence has increased in recent months in the northern West Bank, Palestinian territory occupied since 1967 by Israel, especially in the areas of Nablus and Jenin.
Israeli soldiers have stepped up operations in both cities since March in the wake of deadly anti-Israeli attacks.
These raids, often accompanied by clashes with the Palestinian population, have resulted in more than a hundred deaths on the Palestinian side, the highest death toll in the West Bank in nearly seven years, according to the UN.
Since the beginning of the month, 22 Palestinians and two Israeli soldiers have been killed, according to an AFP report.