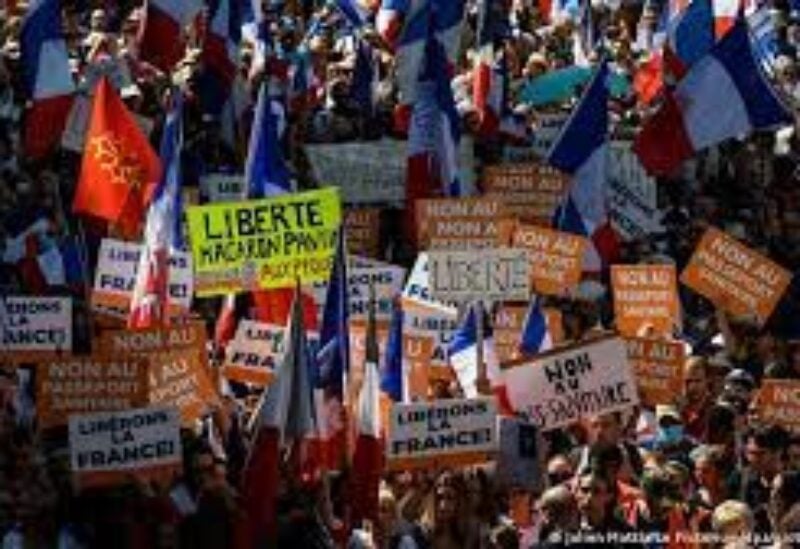 A coronavirus health pass has become obligatory in France for about 1.8 million workers in French restaurants and service jobs to go to work or will face suspension without pay.

The health pass has applied to customers in an expanding list of venues, from cinemas to cafes, and on Monday employees and other workers were added to the list for the first time.

The system will be in force until November 15 but the government has already warned it may be extended.

The health pass is a key weapon in the government’s effort to beat the coronavirus pandemic, but it has also become controversial with a seventh successive weekend of protests against its use.

Protesters are a mix of the far-right, anti-inequality activists, anti-vaxxers and civil liberties campaigners who say the policy encroaches on basic freedoms.

Starting on Monday, most staff members must also have a pass, which shows proof of vaccination, a fresh negative virus test or recovery from Covid-19.

Those who don’t scan a health pass risk suspension or other punishment, and businesses that do not comply face potential fines.

“It is an extremely important tool. We are fortunate to have tools as effective as vaccination, barrier gestures which we perhaps tend to forget the importance, and then this health pass which allows us to consider to resume more and more activities with a certain degree of ease,” epidemiologist Diddier Pittet said.

The government has promised a week without punishments as the business sector introduces the system to workers.

People working in restaurants, cinemas, zoos, museums and on long-distance trains also now need to have a health pass.

There are a number of exceptions, however, such as canteens, takeaway sales, and lorry stops.

For shopping centres of more than 20,000m2, the decision on health passes is made by the local authority.

A vocal minority of people who oppose vaccinations or the health pass system have held weekly protests around the country since July.

Nearly 72 per cent of French people have had at least one vaccine dose and more than 64 per cent are fully inoculated.

France recorded the second-highest number of infections in Europe over the past month, but its summer surge has started to subside after the government imposed stricter vaccination rules and other measures .

“School must remain accessible for all, that’s why there won’t be a health pass required,” he said.