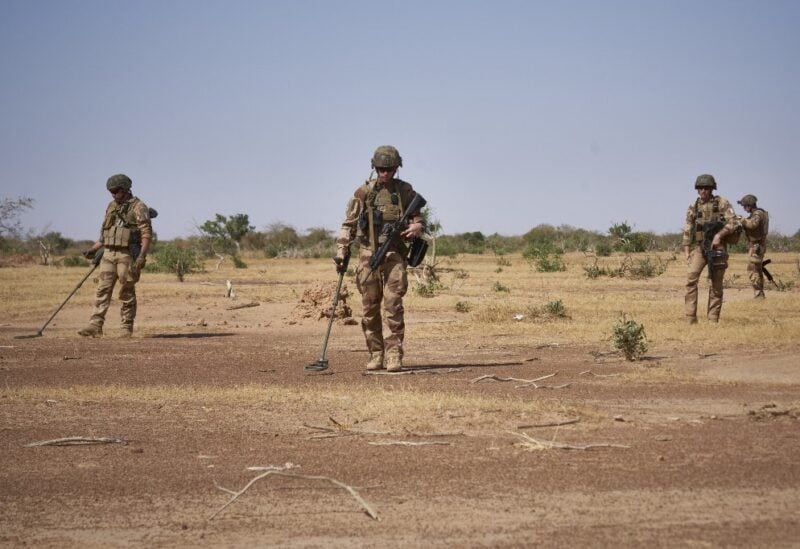 Soldiers from the French Army holds detectors while searching for the presence of IED (Improvised Explosive Devices) during the Burkhane Operation in northern Burkina Faso on November 12, 2019. - Thousands of civilians and soldiers have died in violence across the Sahel which began when armed Islamists revolted in northern Mali in 2012. The conflict has since spread to the centre of Mali and to neighbouring Burkina Faso and Niger. Attacks abound, despite the 4,500 French troops deployed in the region as part of Operation Barkhane. (Photo by MICHELE CATTANI / AFP)

A French air strike in central Mali on Jan. 3 killed 19 civilians and three armed men, according to excerpts from a United Nations investigation due to be released later on Tuesday that contradicts French claims that only Islamist militants were hit.

The French defense ministry said in a statement that it reaffirmed that the strike targeted what it termed armed terrorists, adding it had several reservations about the methodology used in compiling the U.N. report.

Local residents said the air strike, near the village of Bounti, hit a wedding party attended by civilians. The French military said on Jan. 7 that its Barkhane taskforce killed about 30 Islamist militants identified by aerial surveillance.

The human rights division of the U.N. mission in Mali (MINUSMA) has been investigating the incident and visited the area, in central Mali’s Mopti region, in late January.

“MINUSMA has gathered information allowing it to affirm that at least 22 people were killed by the strike by the Barkhane Force,” it said in the report, portions of which were seen by Reuters.

It said 19 people, including 16 civilians and three of five armed men who had been present on site, were killed immediately, while three more civilians died while being transferred for medical care.

The armed men were believed to belong to the Katiba Serma, an armed group affiliated with al Qaeda, it said.