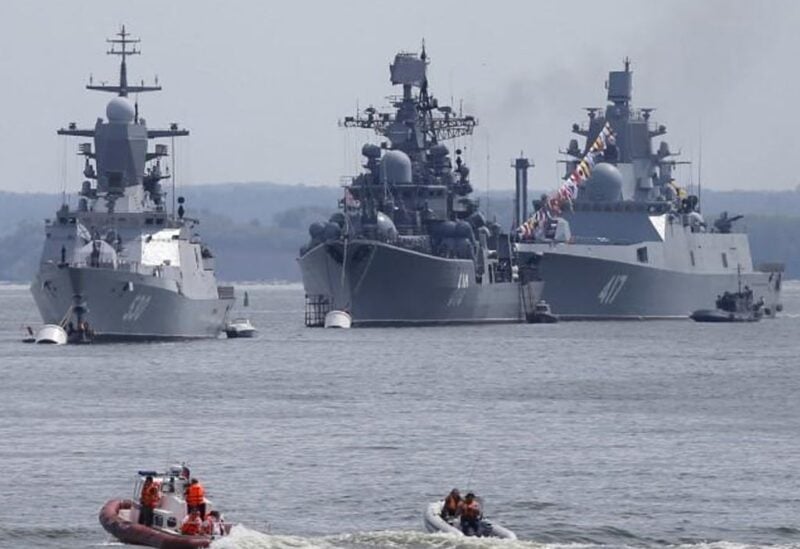 Two Russian warships transited the Bosphorus en route to the Black Sea on Saturday and 15 smaller vessels completed a transfer to the sea as Moscow ramps up its naval presence at a time of tense relations with Ukraine and the West.

The reinforcement comes in parallel with a huge build-up of Russian troops near Ukraine, something Moscow calls a temporary defensive exercise, and follows an escalation in fighting in eastern Ukraine between Russian-backed separatists and Ukrainian government forces.

Moscow’s ties with the United States, which cancelled the deployment of two of its own warships to the Black Sea last week after fierce Russian demonstrations, are at a post-Cold war low.

Russia expelled 10 U.S. diplomats on Friday in retaliation for the expulsion of the same number of Russian diplomats from the U.S. over alleged malign activity.

Moscow has also temporarily restricted the movement of foreign warships “and other state ships” near Crimea, which it annexed from Ukraine in 2014, a move deplored by both Kyiv and Washington.

Two Russian Ropucha-class landing ships from Russia’s Northern Fleet, capable of carrying tanks and of delivering armor and troops during coastal assaults, transited the Bosphorus on Saturday, a Reuters reporter in Istanbul saw.

More Russian naval reinforcements in the form of 2 more landing ships, this time from Russia’s Baltic Fleet, are expected to imminently transit the Bosphorus.

The RIA news agency on Saturday also reported that 15 smaller ships from Russia’s Caspian Flotilla have completed their transfer to the Black Sea as part of an exercise.

In a further sign of heightened tensions in the region, a ship carrying logistics trucks and equipment for NATO forces in Romania transited the Bosphorus on Friday evening, according to the same Reuters reporter.

The Interfax news agency earlier cited the FSB as saying Oleksandr Sosoniuk was taken into custody when he tried to obtain classified information from Russian law enforcement databases during a meeting with a Russian citizen.