Germany Angers Turkey by Rejecting its Operation in N. Syria 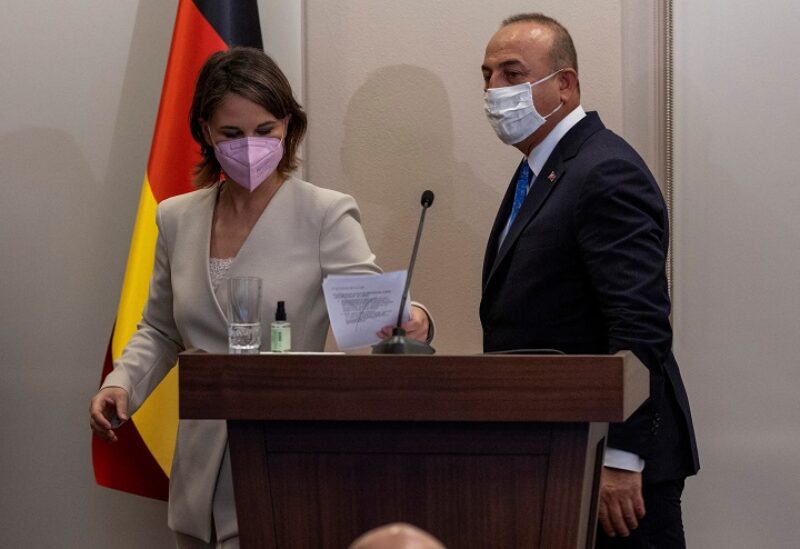 German Foreign Minister Annalena Baerbock urged Ankara not to stage a mooted military incursion into northern Syria, calling it to respect human rights during a testy visit at which she sparred openly with counterpart Mevlut Cavusoglu.

Baerbock was paying her first visit to Turkey after holding talks in Greece that came with old rivalries between the two NATO defense alliance neighbors rising once again.

Turkey accuses Greece of illegally arming its web of islands — some of them visible from the Turkish shore.

Greece counters that Turkey is staging provocative military sorties over the region and threatening to go to war.

“The Greek islands of Lesbos, Chios, Rhodes and many others are Greek territories and nobody has the right to question them,” Baerbock said alongside Greek Foreign Minister Nikos Dendias in Athens.

“We cannot solve the problems of the east Mediterranean by escalating tensions,” she added during a joint media appearance with Cavusoglu.

Cavusoglu retorted: “Why are you closing your Greece’s unlawful actions.”

Turkey and Germany developed a warm friendship in the era of former chancellor Angela Merkel.

Germany accepted millions of Turkish workers and pushed for broader EU assistance to Ankara aimed at rewarding it for hosting people fleeing the war in Syria and other conflicts.

But Baerbock was more critical of Turkey as leader of the leftist Green party and raised a number of what she called “difficult” issues in Istanbul.

Baerbock warned that Turkey’s threat to launch a new offensive against Kurdish military in northern Syria “will only cause more pain for people” and help extremists from ISIS.

She called for the release of civil society leader Osman Kavala — jailed for life this year on what most Western governments believe are trumped-up charges — and stressed that “persecuted people’s rights should be protected”.

Cavusoglu turned and looked directly at Baerbock during some of his firmest remarks.

“Why are you mentioning Kavala?” Cavusoglu demanded. “Because you used him. We know that you funded Gezi events.”

“When Merkel was there, Germany’s position was balanced,” Cavusoglu said. “It could do mediation.”

German played a central role in helping calm another spike in tensions between Ankara and Athens in 2020.

Baerbock’s visit to Athens saw Greek Foreign Minister Nikos Dendias call on Germany to suspend a joint venture under which Turkey is producing a modern new class of submarines.

These submarines “threaten to shift the balance of forces in the Eastern Mediterranean,” Dendias said.

“The paradigm of revisionism must not succeed.”