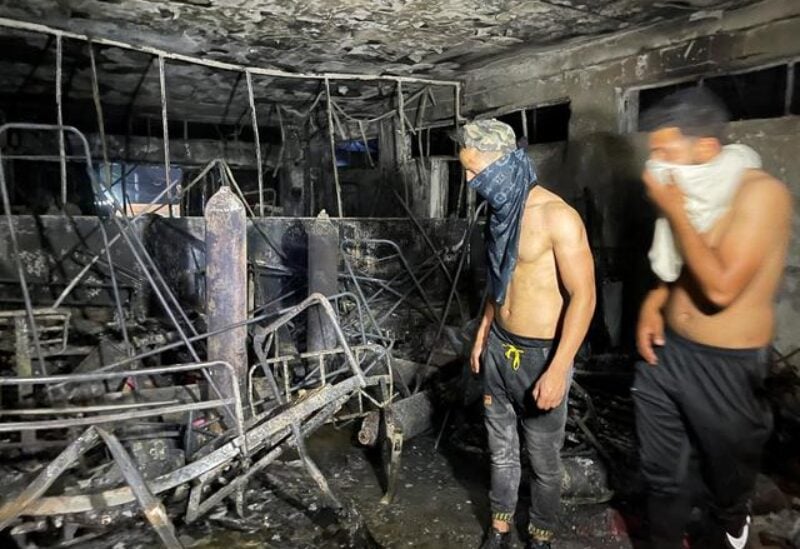 Iraqi security forces sealed off the charred Ibn Al Khateeb hospital in Baghdad on Sunday, as investigative and forensic teams looked for the cause of an oxygen tank explosion in an intensive care unit for COVID-19 patients.

Parts of the windows and walls of the second floor were blackened by soot from the inferno that followed the explosion.

The blaze claimed at least 82 lives and wounded 110.

Outside, eyewitnesses and survivors were haunted by flashbacks to Saturday night’s events.

“It was horrific,” 52-year-old Jabar Mohammed who was with his coronavirus-infected brother on the hospital’s third floor, told The National.

“First, we heard the blast and then we saw the fire coming up.”

He ran outside the room and saw residents from the area, but no other patients.

“They rushed over to us and grabbed my brother with his oxygen tank to take him out to the other section of the hospital,” the father of 6 said.

He said the hospital lacked basic safety mechanisms for such incidents – such as a sprinkler system.

Mohammed blamed the country’s rooted corruption and what Iraqis call muhasasa, a quota-based system introduced after the 2003 U.S.-led invasion that toppled Saddam Hussein.

Under this system, government posts are distributed based on sect first, followed by party affiliation, regardless of qualifications.

“That’s the result when we have incompetent government officials,” Mohammed said, adding “we will not be able to rebuild our country without getting rid of muhasasa.”

Mohammed Hameed and his 4 brothers rushed from the nearby mosque to rescue patients when they heard cries for help.

“Women suffocated and no one could approach to rescue them,” Hameed, 31, said.

Another man, who identified himself by his nickname, Abu Hussein, said he rescued 5 people, two women and three men.

“It was chaotic and tragic, you couldn’t see the person next to you due to heavy smoke,” he said, adding “there were many charred bodies, some they couldn’t remove as they stuck to the beds.”