Gulf countries, China to invest in the future, energy 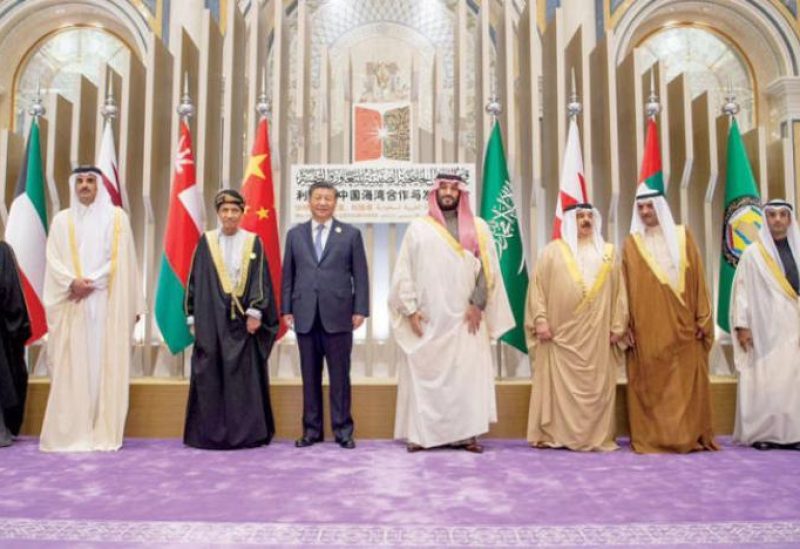 The Gulf-Chinese summit on Friday concluded the importance of joint work and integration in future projects, namely investment in innovation, technology, and energy, and in collaborative work on regional security and stability.

Saudi Crown Prince Mohammed bin Salman bin Abdulaziz said that regional security and stability can’t be achieved without “the exit of mercenary militias from all Arab territories and the cessation of external interference in their affairs.”

The Crown Prince gave a speech at the Riyadh Gulf-China Summit for Cooperation and Development, which he chaired on behalf of the Custodian of the Two Holy Mosques, King Salman bin Abdulaziz.

Several leaders and heads of delegations of the Gulf Cooperation Council (GCC) countries, and Chinese President Xi Jinping, attended the summit on Friday at the King Abdulaziz International Conference Center in Riyadh.

Crown Prince Mohammed indicated that the GCC’s member states view China as an essential partner for them, and the favorable fruits of this partnership have been reflected in their common interests and the security and stability of the region.

In his speech, he stressed that GCC countries are interested in working with Beijing to explore practical ways to address global challenges, including food security and improving the integration of global supply chains and energy security.

The GCC states affirm that they will continue their role as a reliable source to meet the energy needs of the world and China.

The Crown Prince welcomed the attendees on behalf of the Custodian of the Two Holy Mosques, wishing them success in their endeavors and efforts to preserve security and stability and achieve peoples’ aspirations for a better future.

“We meet today in light of the many challenges facing the region and the world amid exceptional circumstances that require us to activate joint collective action to face these challenges, and based on the noble goals and objectives upon which the GCC was established, and based on the depth of the historical relationship and friendship that bind our countries with the People’s Republic of China.”

The Crown Prince said the summit establishes a new historic start for the relationship between China and Saudi Arabia, aiming to deepen cooperation with the People’s Republic of China in all fields and coordinate views on regional and international issues.

He indicated that GCC countries consider China an “essential and important partner,” noting that the favorable fruits of this partnership have been reflected in the common interests and regional security and stability.

The rapid economic growth and significant technological development that China has reached under the leadership of President Xi is a success story reflected in China’s position as the global economic leader.

The Crown Prince asserted that the GCC countries look forward to exchanging experiences and creating diverse partnerships in light of the ambitious development plans of the GCC states.

He asserted: “We commend the rapid development in the GCC-China relationship and the solid diversity in strategic cooperation between the two sides, such as trade, investment, energy, education, scientific research, environment, and health.”

The GCC countries also look forward to increasing this cooperation to broader horizons.

In his speech, the Crown Prince also referred to the remarkable increase in trade exchange between the GCC countries and China during the past years, which “we expect to continue to grow after discussing the negotiations for the establishment of a free trade zone.”

The GCC countries value the strategic partnership between them and China and praise the joint action plans for the period (2023-2027) for their importance in strengthening the strategic framework for cooperation between the two sides, said Crown Prince Mohammed.

He announced that GCC countries are interested in working with China to explore practical ways to address global challenges, including food security and improving the integration of global supply chains and energy security.

The GCC countries appreciate China’s endeavors to put forward initiatives concerned with revitalizing the course of cooperation and strengthening international multilateral action, foremost of which is the Group of Friends of the Global Development Initiative.

“We share the thinking with our friends in the People’s Republic of China about the importance of reorienting the international community’s focus towards cooperation, development, and addressing the common challenges facing humanity.”

The Crown Prince asserted that Gulf countries are going to exert all efforts to enhance regional security and stability as well as support political solutions and dialogue for all regional and international tensions and conflicts, based on the fact that this is the path that guarantees to achieve peace, security, and prosperity.

Prince Mohammed extended his thanks, on behalf of the GCC countries, to China, led by President Xi Jinping on the continuous endeavor to deepen Chinese-Gulf relations.

For his part, the Chinese President expressed his sincere thanks to Saudi Arabia for its efforts to host the first GCC-Chinese summit.

During his speech before the summit, he reviewed the beginnings of Chinese-Gulf relations, during which the two sides wrote impressive chapters of solidarity, support, cooperation, and mutual gain.

He indicated that China and the GCC countries always exchange support for the sovereignty, independence, and respect of each other’s development paths, uphold the equality of all nations, whether big or small and firmly advocate multilateralism.

The Chinese leader pointed to the high integration between the two sides, pointing out that China enjoys a broad consumer market and an integrated industrial system.

The GCC is characterized by rich energy resources and the successful development of diversifying the economy.

The President said: “The Chinese side highly commends the efforts exerted by the GCC countries to make the council the most vital regional organization in the Middle East and the GCC.”

He called for consolidating mutual trust and firm support for the vital interests between China and the GCC countries, working together to maintain the principle of non-interference in internal affairs, and exerting joint efforts to implement genuine multilateralism in a manner that preserves the common interests of developing countries.

“We must strengthen the harmonization between our development strategies, activate the advantages of integration, and generate an impetus for development,” said the President, expressing the aspiration to join efforts with all parties in implementing the global development initiative and implementing the UN 2030 Agenda for Sustainable Development.

He asserted that China would continue its unwavering support for the GCC countries in maintaining their security and support the region’s countries to resolve differences through dialogue, consultation, and building a collective security system in the Gulf.

Xi welcomed the GCC countries to participate in the global security initiative to maintain regional peace and stability with joint efforts and be partners in advancing civilization.

The President explained that during the next three to five years, China is keen on concerted efforts with the GCC’s member states to cooperate in priority areas.

He indicated that priority areas include building a new formula for comprehensive cooperation in energy, whereby China will continue to import crude oil and a large amount from the GCC states and increase the import of liquefied natural gas.

He also reiterated the need to enhance cooperation in engineering services, storage, and refining of oil and gas, using the Shanghai Stock Exchange for oil and natural gas as a platform for oil and gas trade settlement in the Chinese currency.

He said China would also enhance cooperation in clean and low-carbon technologies such as hydrogen energy, energy storage, and smart electric grids.

Xi explained that Beijing seeks to enhance cooperation in consolidating the production of equipment related to new energy, the establishment of the Chinese-GCC Forum for Peaceful Uses of Energy Nuclear Power, and participate in the establishment of the Chinese-GCC Excellence Center for Nuclear Security and Specialized Training in the peaceful uses of nuclear energy and nuclear technology for the GCC states.

The second area includes pushing for new progress in finance and investment, as China is keen to cooperate with the GCC’s member states in financial supervision.

Xi hoped this would facilitate the entry of GCC companies into the Chinese capital market, establish a joint investment council with the GCC side, and support cooperation between sovereignty funds in different ways.

He also addressed expanding technological innovation cooperation to new areas, as China is keen to cooperate with the GCC states in establishing hubs for big data and cloud computing, enhancing collaboration in fifth-generation technology, sixth generation communications, designing a batch of incubators for innovation and entrepreneurship, and carrying out projects for the economy in areas of cooperation on cross-border e-commerce.

He called for innovations for space cooperation, as China is keen to launch a series of cooperation projects with the Gulf countries in remote sensing satellites, space communications, applications, space infrastructure, and cooperation in selecting the training of astronauts.

Xi concluded his speech by reiterating that Gulf countries and China bear a message for the nation’s development and renaissance, as a long history and a promising future characterize the Chinese-GCC relations.

“Let us work hand in hand to follow up the past march, move hand in hand forward, and work together to create a beautiful future in Chinese-Gulf relations.”

Also at the summit, Bahrain’s King Hamad bin Isa Al Khalifa said that these three summits are held under complex political conditions that require intensifying joint efforts to spare the region the repercussions of regional and international conflicts and crises.

The King asserted the importance of unity between the GCC member states as the bulwark of stability and the catalyst of growth and development.

He underscored the significance of commitment to implementing all resolutions of the GCC Supreme Council and Al-Ula Summit communique.

He called to continue coordinating the GCC stances in international gatherings to convey the summit’s message of fostering just and comprehensive peace and maintaining global security based on mutual respect.

The summit later issued a final communique addressing the issues discussed during the meeting.