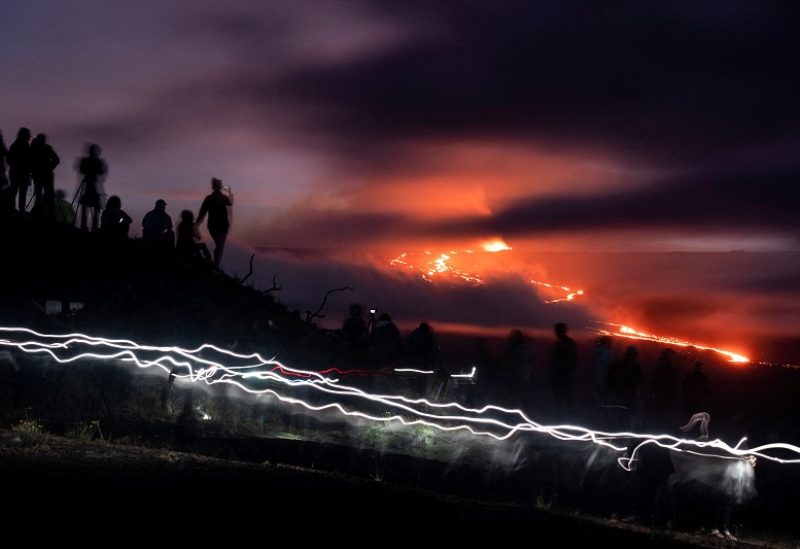 People gather to observe the eruption of the Mauna Loa Volcano in Hawaii, U.S. December 1, 2022. REUTERS/Go Nakamura TPX IMAGES OF THE DAY

Dozens of tourists, including families along with their children, are flocking to catch a glimpse of the Hawaiian volcano Mauna Loa’s flowing lava which began erupting this week for the first time since 1984. After the Emergency Management Agency of Hawaii stated that no signs of lava threatening the populated areas were visible,
Tourists have been seen setting up their sacks and camping chairs from their vehicles to watch nature’s wonders for some hours. Local artists are also reaching the place to paint the eruption in its full glory.

The authorities stated that the flow of lava from Mauna Loa has slowed down and is spreading out, and they continue to flow three miles away from a highway.
In its latest bulletin on Mauna Loa, the US Geological Survey’s Hawaiian Volcano Observatory said that the lava is flowing at the speed of .025 miles per hour (40 meters per hour). They added that seismic tremors can still be detected in the area, which means that the fissures are still receiving the magma and “activity is likely to continue as long as we see this signal.”

Mauna Loa, the world’s largest active volcano, lies 13,679 feet (4,169 meters) above the Pacific Ocean. The volcano had last erupted in March and April of 1984, which led to lava flowing within five miles of Hilo, the largest city in Hawaii.

The Emergency Management Agency of Hawaii stated that two shelters have been opened on the island as part of precautionary measures, but no evacuation orders have been issued.