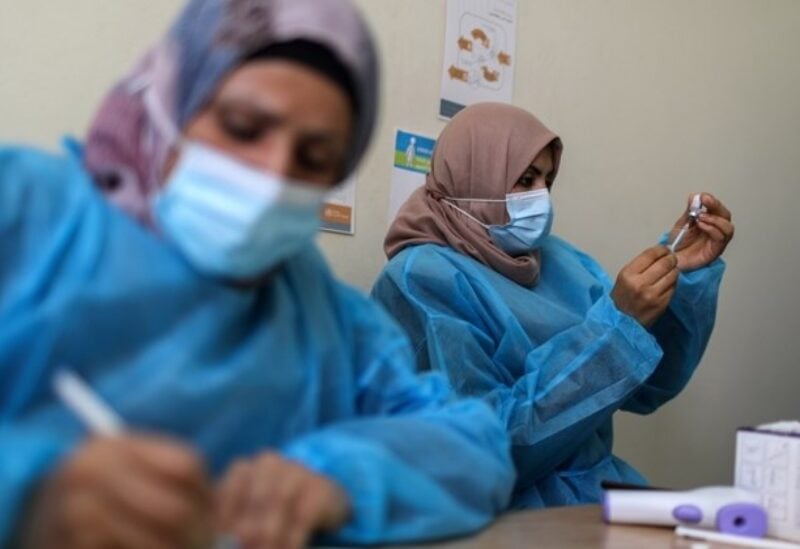 A health worker prepares a vaccination against the coronavirus disease, in Gaza City March 17, 2021.

Waiting for her COVID-19 vaccination in a Gaza clinic, Leena Al-Tourk, 28, a Palestinian lawyer, recalled the social pressure she faced in the conservative enclave over getting the vaccine dose.

“Some people told me, are you insane? Wait until you see whether it is good or bad,” Al-Tourk said.

Just 8,500 people have turned out to be inoculated in Gaza according to an official, even though the enclave of 2 million people has received nearly 83,300 vaccine shots since February donated by Russia, the United Arab Emirates and the global COVAX program.

Suspicion of the vaccines runs deep in Hamas Islamist-run Gaza, which has recorded more than 57,000 COVID-19 infections and 572 deaths. It has recently loosened lockdown restrictions.

Some people fear potential side-effects from the jab and are sharing their misgivings widely on social media.

Millions of doses of coronavirus vaccines have been administered across the world.

“We have the experience of 8,500 people who have already taken (the shot),” he said.

Mild side-effects experienced by some people such as short-term headaches and fever “cannot be compared to the huge benefits the vaccine offers to protect them against infection,” he said.

Dhair said health authorities in Gaza were prioritizing the around 150,000 people deemed to be at high risk, such as medical personnel and people with underlying health conditions.

“Only 26,000 people registered. This is a minimal number,” he said, citing misinformation on social networks as part of the problem.

On a Gaza street, 57-year-old Ahmed Nasser leaned against a pro-vaccination mural, painted by youngsters, that depicts a “coronavirus” with jagged teeth trying to tug a woman away from 2 youths holding her hand.

“Protect yourself,” a slogan next to the painting says. “Hand in hand we protect the elderly.”

Nasser, a government employee, was unconvinced. “Of course I will not take the vaccine. They say on social media it can lead to blood clots,” he said.

In contrast, 100,000 Palestinians have registered to get inoculated in the Israeli-occupied West Bank, where authorities have received 76,700 doses donated by Israel, Russia and COVAX.

Both the West Bank and Gaza lag far behind Israel, which has been a world leader in its inoculation drive.