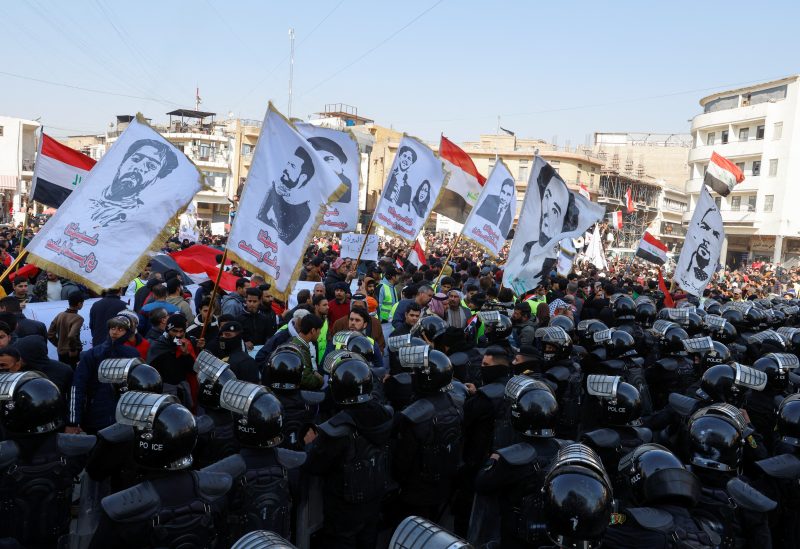 Police officers gather as Iraqi protesters demonstrate against the dinar's slide in value against the U.S. dollar, near the central bank in Baghdad, Iraq January 25, 2023. REUTERS/Ahmed Saad

Hundreds of Iraqis protested in front of the Baghdad central bank’s offices about the recent decline of the Iraqi dinar against the dollar, which has led to an increase in the cost of imported consumer products.

Hundreds of Iraqis from various regions waved flags or held placards calling for government intervention to stem the dinar’s slide from 1,470 to approximately 1,620 to the dollar since November.

The dinar went into a tailspin against the dollar after the New York Federal Reserve imposed tighter controls on international dollar transactions by commercial Iraqi banks in November to halt the illegal siphoning of dollars to neighbouring Iran, which is under tough U.S. sanctions.

Under the curbs that took effect this month, Iraqi banks must use an online platform to reveal their transaction details. But most private banks have not registered on the platform and resorted to informal black markets in Baghdad to buy dollars.

This has created dollar shortages as demand has outstripped supply and accelerated the dinar’s descent against the greenback, Iraqi central bank officials and traders say.

“Our demands are clear: government must intervene to stop the decline of dinar value because we’re suffering from high prices in local markets,” said Asaad Khudhaer, a labourer who came from the southern city of Najaf to attend the protest.

“Stop the neighbours stealing our dollars,” one banner read, alluding to Iran.

Dozens of anti-riot policemen were deployed around the central bank building and surrounding streets but no clashes or arrests were reported.

Prime Minister Mohammed al-Sudani replaced the central bank governor on Monday as he had not taken effective steps to tackle the consequences of the new Fed regulations and their impact on the dinar, government sources told Reuters.