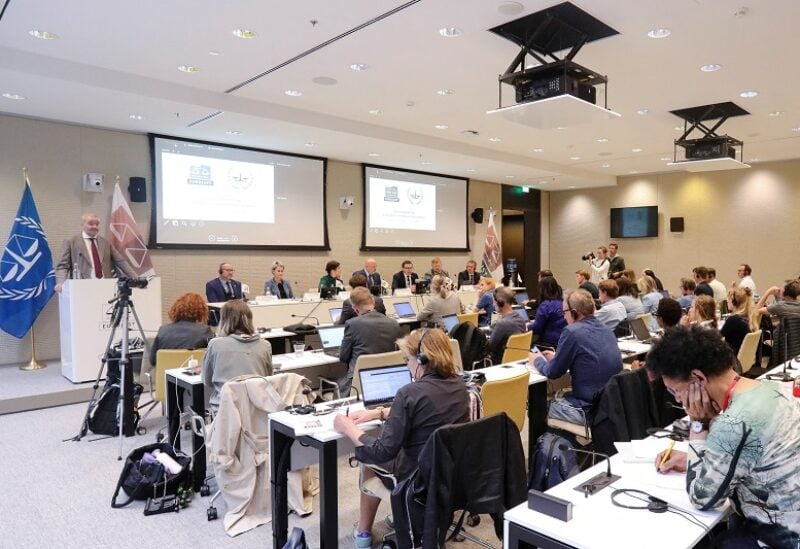 A general view during a news conference attended by Lithuania's Prosecutor General Nida Grunskiene, Ukraine's top prosecutor Iryna Venediktova, ICC Prosecutor Karim A. A. Khan QC and Eurojust President Ladislav Hamran after a meeting at the International Criminal Court to discuss investigations into alleged war crimes amid Russia's invasion of Ukraine, in The Hague, Netherlands May 31, 2022. REUTERS/Eva Plevier

The status of investigations into alleged war crimes in Ukraine, was discussed by Prosecutors from Ukraine, Poland, Lithuania and the International Criminal Court (ICC), who met in The Hague on Monday and Tuesday.

The meeting was held at the European Union’s judicial cooperation agency, Eurojust, which coordinates the work of prosecutors.

Estonia, Latvia and Slovakia signed an agreement during a two-day coordination meeting to join Lithuania, Poland and Ukraine in the Joint Investigation Team that will help coordinate the sharing of evidence of atrocities committed in Ukraine through Eurojust.
After the meeting, ICC Prosecutor Karim Khan said that the International Criminal Court was “working toward opening an office in Kyiv” to support the investigations. The ICC has already deployed a team of 42 investigators, forensic experts and support personnel to Ukraine, the largest in the organization’s history.

He also said the teamwork underscores the international community’s commitment to the rule of law. “I think it shows that there is this common front of legality that is absolutely essential, not just for Ukraine but for the continuation of peace and security all over the world,” Khan said.

Hugh Williamson, Europe and Central Asia director at Human Rights Watch, told DW that it was important that the investigative teams had already started their work.

“The Ukrainian prosecutor’s office is busy with this issue. The International Criminal Court has sent experts to Ukraine as well. It’s important that these teams are well-coordinated, sharing resources, supporting the prosecutor’s office in the work they’re doing,” Williamson said.
Ukraine’s Prosecutor General Iryna Venediktova, who also attended the meeting, said Ukraine had identified more than 600 Russian war criminals and started prosecuting about 80 of them.

Speaking to DW in The Hague on Tuesday, she declined to offer an opinion on the likelihood of actually prosecuting senior Russian officials like Vladimir Putin, although she said also there was no doubt it was the Russian president and his team “who started this war” of aggression.

“In our main anchor court case, we have more than 600 suspects of crimes of aggression, all of them top level of militaries, politicians, top propaganda agents — all of them, except presidents, minister of foreign affairs and prime minister, because they have functional immunity when they are still sitting on the positions,” Venediktova said.

Ukraine’s prosecutor general said that each case was an individual tragedy, with some now etched into her memory.

“It’s impossible to forget. It’s impossible to forgive. If we speak about just children and civilians who tried to evacuate from Kiev — with their children, with pets in their cars, with huge letters “CHILDREN” [on the cars] and they were shot after this.”
Venediktova also told DW that it was a major benefit to have international investigators on the ground, partly as their view might be seen as more impartial than hers as a Ukrainian. However, she also cautioned that her team had been working “24, seven” for the last three months, including in areas very close to the front “which are not safe, which are dangerous.” She noted that some international observers might not be able or permitted to do this.

Three soldiers have already been convicted In Ukrainian courts, two of them on Wednesday, and the first on charges of murder last week. Both trials lasted just a few days.

According to HRW’s Hugh Williamson, impartiality is a key issue in the war crime investigation in Ukraine.

“Therefore, the Ukrainian prosecutor’s office needs to assess things through the judicial lens and make sure that trials are free and fair, which is a challenging task in a war situation,” Williamson said. “But it’s absolutely vital for that to happen if the results and the verdicts are to be seen as credible in the longer term.”
Moscow’s invasion of Ukraine has been widely condemned as an illegal act of aggression. Russian forces have been accused of killing civilians in the Kyiv suburbs, as well as of repeated attacks on civilian infrastructure all over Ukraine.

The meeting in The Hague isn’t the only place accountability is being sought. Prosecutors in Poland, Germany, Lithuania, Latvia, Estonia, France, Slovakia, Sweden, Norway and Switzerland have opened investigations of their own.