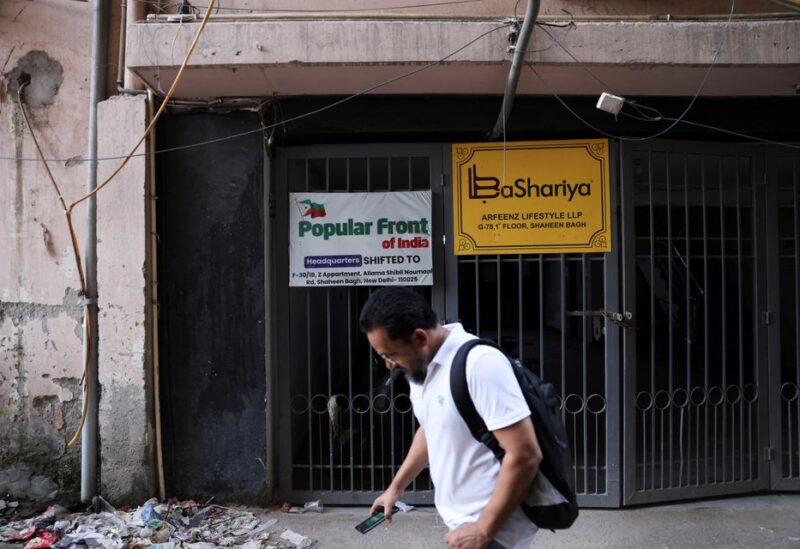 India branded the Popular Front of India (PFI) Islamic group and its affiliates illegal on Wednesday, accusing them of terrorism and barring them for five years, after authorities apprehended more than 100 PFI members this month.

The PFI announced its dissolution and asked its members to cease their operations.

“As law-abiding citizens of our great country, the organization accepts the decision of the Ministry of Home Affairs,” the PFI’s branch in Kerala state, where it has a big presence, said in a statement.

On Tuesday, the PFI denied accusations of violence and anti-national activities when its offices were raided and dozens of its members were detained in various states.

The home ministry, in announcing the ban, said in a statement the PFI and its affiliates had “been found to be involved in serious offences, including terrorism and its financing, targeted gruesome killings, disregarding the constitutional set up”.

The PFI’s now-banned student wing, the Campus Front of India (CFI), called the government action a political vendetta and propaganda. It denied the accusations of involvement in terrorism.

Muslims account for 13% of India’s 1.4 billion people and many have complained of marginalisation under the rule of Prime Minister Narendra Modi’s Hindu nationalist Bharatiya Janata Party.

Modi’s party denies accusations of discrimination against Muslims and points to data its says shows that all Indians irrespective of religion are benefiting from the government focus on economic development and social welfare.

The PFI has supported causes such as protests against a 2019 citizenship law that many Muslims deem discriminatory, as well as protests in the southern state of Karnataka this year demanding the right for Muslim women students to wear the hijab in class.

The ban is likely to stir an outcry among opponents of the government, which retains broad public support and a comfortable majority in parliament eight years after Modi first became prime minister.

The Social Democratic Party of India (SDPI), which works with the PFI on some issues but was not included in the ban, said the government had struck a blow against democracy and human rights.

“Freedom of speech, protests and organizations have been ruthlessly suppressed by the regime against the basic principles of the Indian constitution,” the SDPI said in a statement.

Some SDPI office were raided and some of its members were detained this month.

The government said it found a “number of instances of international linkages of PFI with global terrorist groups”, adding that some of its members had joined Islamic State and participated in “terror activities” in Syria, Iraq and Afghanistan.

India has been the victim of some major militant attacks over the past two decades, most linked to Islamists based in neighboring Pakistan.

The PFI came together in late 2006 and was launched formally the next year with the merger of three organizations based in south India. It calls itself a “social movement striving for total empowerment” on its website.