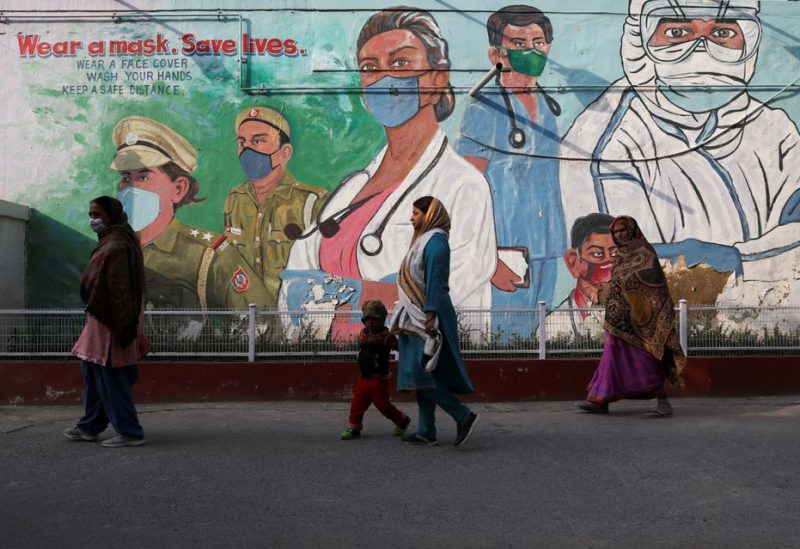 Women walk past a graffiti amidst the spread of the coronavirus disease (COVID-19) in New Delhi, India, February 7, 2022. REUTERS

In response to an upsurge in COVID-19 cases in China and other parts of the world, the Indian government has urged its states to keep a close eye out for any new coronavirus variations and advised people to wear masks in crowded places.

On Wednesday, key government officials and the health minister met to examine the issue. Everyone in attendance was wearing a mask, which is no longer required in most of the nation’s regions.

“COVID is not over yet. I have directed all concerned to be alert and strengthen surveillance,” he said on Twitter. “We are prepared to manage any situation.”

Local media reported on Wednesday that India has detected at least three cases of the highly transmissible BF.7 Omicron sub-variant so far, which in October led to a surge in COVID-19 infections in China.

India’s health ministry did not immediately respond to a Reuters request for comment on the media reports.

China has registered a surge in infections after ending strict restrictions, while data from the World Health Organization shows infections have risen in countries including Japan, South Korea and the United States in recent days.

The Indian government has asked all states to ensure that samples of positive cases are sent to the country’s 54 designated genome sequencing laboratories.

Some opposition leaders and Twitter users in India have called for a suspension of flights to and from China. A government source, who was not authorized to speak to media and declined to be identified, said there was no such plan.

Following the lifting of severe regulations, China has seen an increase in infections, and recent data from the World Health Organization indicates that infections have also increased in Japan, South Korea, and the United States.

The 54 designated genome sequencing laboratories in India have been requested by the Indian government, and all states must make sure that samples from positive cases are given there.

India’s opposition figures and several Twitter users have demanded a halt to travel to and from China. There is no such plan, according to a government source who would not provide their name because they were not authorized to speak to the media.