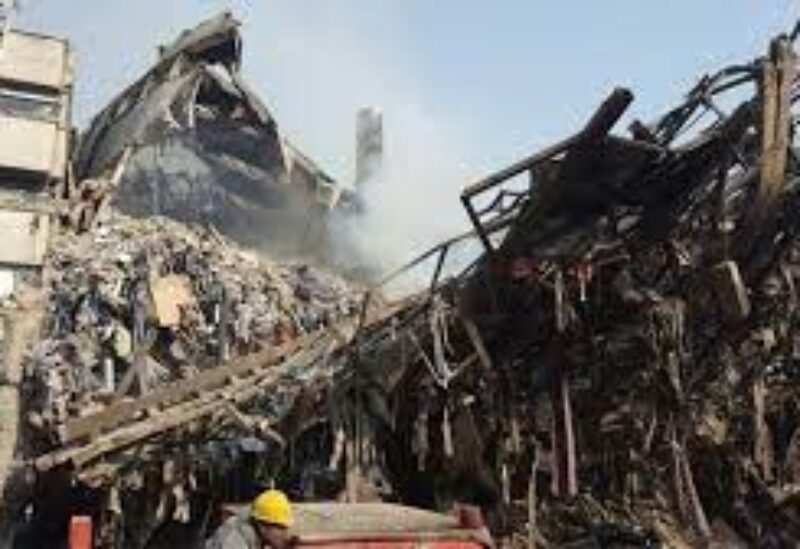 On the fifth anniversary of a tower blaze that caused the death of many Iranian firefighters, dozens of their colleagues, rallied in Tehran to protest their living conditions, local media reported on Wednesday.
Sixteen firefighters died when Plasco, the oldest high-rise in Iran’s capital, collapsed on January 19, 2017 after a blaze engulfed the building.
Four civilians also lost their lives, state media reported at the time.
The 15-story building, home to a shopping center and hundreds of clothing suppliers, collapsed while emergency services personnel were still evacuating people from the inferno.
More than 100 firefighters and their family members gathered in front of the municipality and city council in central Tehran to mark the anniversary, ISNA news agency reported.
The firefighters, many wearing their red uniforms, chanted: “Adequate livelihood is our inalienable right,” and “We are tired of promises and lies, not of fire and smoke,” the agency said.
They held placards reading, “discrimination, mismanagement, low pensions, welfare problems,” it added.
The protesters also demanded that parliament address their issues including providing proper housing for firefighters in Tehran and increasing their salaries, according to the report.
Hit by severe economic sanctions imposed since 2018 by the United States, Iran has seen its inflation rate surge to close to 60 percent.
Other professions have also rallied over the past few days.
Hundreds of teachers across Iran protested changes to their pay and pensions. Civil servants in the judicial sector also demonstrated, after the government refused to increase their pay.
The Plasco disaster sent shock waves across Iran. Rescue teams worked for days to recover bodies from under the rubble.
The owners and city officials were criticized for failing to prevent the disaster at the building, which according to the fire brigade was known to breach multiple safety regulations.
A new building replacing the old tower has been completed with 20 floors, five of which are underground.
But it “has not yet received the approval from the fire department,” the department’s spokesman Jalal Maleki told state TV on Wednesday.
The building’s management have “promised us not to inaugurate it until they get the fire department’s approval and they have so far kept their promise,” he added.