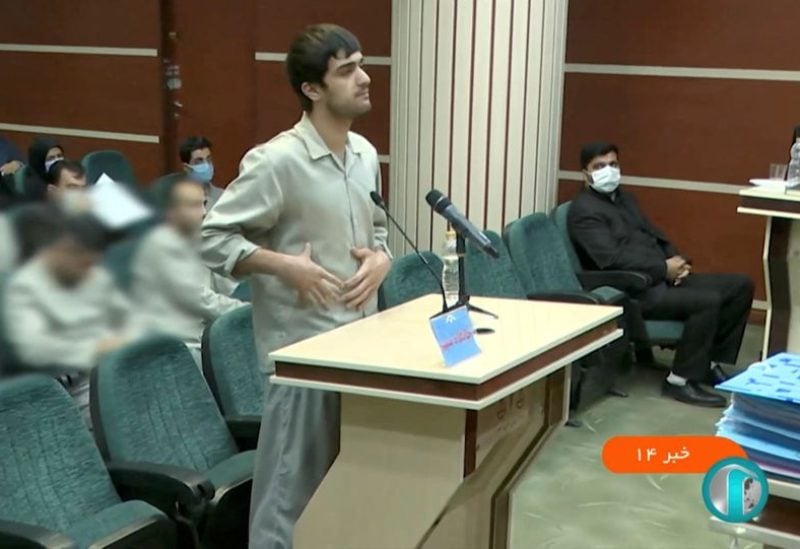 Mohammad-Mehdi Karami speaks in a courtroom before being executed by hanging, along with Seyyed Mohammad Hosseini, for allegedly killing a member of the security forces. Tehran, January 7, 2023. West Asia News Agency)/Handout via REUTERS

Two men were hanged in Iran on Saturday for allegedly killing a security force member amid widespread protests that followed the death of Mahsa Amini, a 22-year-old Kurdish Iranian woman, on September 16. This action drew condemnation from the EU, the US, and other Western countries.

The two men who were hanged on Saturday had been found guilty of murdering a Basij paramilitary force militia member. In the same case, 11 people were given prison sentences, while three others received death sentences.

“Mohammad Mehdi Karami and Seyyed Mohammad Hosseini, principle perpetrators of the crime that led to the unjust martyrdom of Ruhollah Ajamian were hanged this morning,” the judiciary said in a statement carried by the official IRNA news agency.

The latest executions bring to four the number of protesters officially known to have been executed in the aftermath of the unrest.

The European Union’s top diplomat on Saturday condemned the executions and called on Iran to immediately stop carrying out death sentences against protestors, and annul existing sentences.

“This is yet another sign of the Iranian authorities’ violent repression of civilian demonstrations,” Josep Borrell said in a statement.

British Foreign Minister James Cleverly on Saturday condemned the executions and urged Iran to “immediately end the violence against its own people.”

The French foreign ministry called the executions “revolting” and urged Iranian authorities to heed the “legitimate aspirations of the Iranian people.”

The Dutch government said it would summon Iran’s ambassador to the Netherlands for the second time in a month to raise its concerns over the execution of demonstrators, and urged other EU countries to do the same.

Amnesty International said last month that Iranian authorities are seeking the death penalty for at least 26 others in what it called “sham trials designed to intimidate protesters”.

It said all of those facing death sentences had been denied the right to adequate defence and access to lawyers of their choosing. Rights groups say defendants have instead had to rely on state-appointed attorneys who do little to defend them.

Hosseini’s lawyer Ali Sharifzadeh Ardakani said in a Dec. 18 tweet that Hosseini had been severely tortured and that confessions extracted under torture had no legal basis.

He said Hosseini was beaten with his hands and feet tied up, kicked in the head until he passed out, and subjected to electric shocks on different parts of his body.

Iran denies that confessions are extracted under torture.