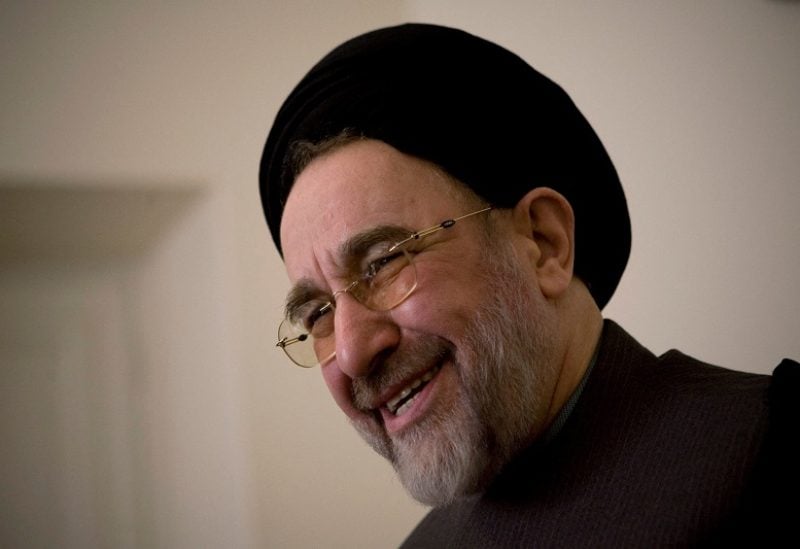 FILE PHOTO: Former Iranian President Mohammad Khatami speaks with Reuters correspondents in Tehran in this January 22, 2008 file photo. Khatami, who won presidential elections in 1997 and 2001 with landslides, gave the strongest signal yet on Monday that he was considering running in this year's race for the Iranian presidency. REUTERS/Caren Firouz/File Photo

The two-term reformist president, who served between 1997 and 2005, described “woman, life, freedom” as a “beautiful slogan,” and said that it showed Iranian society was moving toward a better future.

“It should not be allowed that freedom and security are placed in opposition to one another, and that as a result freedom is trampled under the pretext of maintaining security, or that security is ignored in the name of freedom,” he said.

“I advise officials to appreciate this presence and instead of dealing with it unjustly, extend a helping hand to them and, with their help, recognize the wrong aspects of governance and move toward good governance before it is too late.”

Khatami’s comments came in a statement to mark Student Day on Wednesday, with students having been at the forefront of the wave of protests that are now into their fourth month.

Protests were sparked by the September murder of 22-year-old Kurdish woman Mahsa Amini while in the custody of Iran’s notorious morality police.

Her death ignited pent-up frustrations over falling living standards, and discrimination against women and minorities.

Protests have spread to more than 150 cities and 140 universities in all 31 of Iran’s provinces, and are now considered the most serious challenge to the regime since it took power in the 1979 revolution.

Iran’s leadership has sought to portray the protests as “riots” instigated by “foreign enemies.”

Despite the brutal crackdown by security forces, which have led to the deaths of 473 protesters and the detention of more than 18,000 people, demonstrations show little sign of abating, with Khatami describing student involvement as “perhaps unprecedented.”

Iran’s judiciary also sentenced five protesters to death on charges of “corruption of the Earth” on Tuesday, with 11 others, including three children” handed long prison sentences.

Director of Iran Human Rights Mahmood Amiry-Moghaddam told AFP News: “These people are sentenced after unfair processes and without due process. The aim is to spread fear and make people stop protesting.”

A total of 11 protesters have now been sentenced to death, with the country’s judiciary chief saying on Monday that executions will be carried out “soon.”