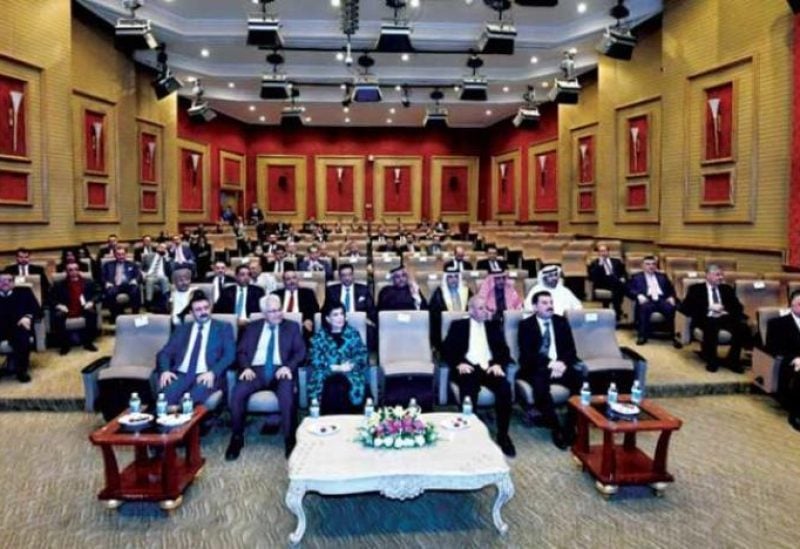 Officials are seen at the symposium. (Iraqi Ministry of Foreign Affairs on Twitter)

Iraq announced that its relationship with its Arab surroundings had entered a “new phase,” stressing that the 25th Arabian Gulf Cup, which is currently being held in the city of Basra, will help strengthen the country’s political status in the Arab, regional and international arenas.

The Ministry of Foreign Affairs issued a statement on Monday following a symposium, “Foreign Policy and Sports Diplomacy: A Message of Peace and Affection among Peoples”. organized by its Foreign Service Institute with the participation of a number of Arab and foreign politicians, heads of diplomatic missions, researchers and experts.

“During the symposium, it was emphasized that organizing the 25th Arabian Gulf Cup in Basra is a means to strengthen bilateral relations between Iraq and the Arab Gulf states. It also another factor that contributes to consolidating Iraq’s political position in the Arab, regional, and international arenas, and provides it with broader horizons,” the ministry’s statement read.

Iraqi Prime Minister Mohammed Shia al-Sudani had refused to apologize for naming the tournament the “Arabian Gulf” instead of the “Persian Gulf” – as requested by Iran – stressing that his country was part of the Arab system and keen on maintaining the relationship with Arab Gulf states.

In an interview with the German Deutsche Welle channel, on the sidelines of his visit to Berlin last week, Sudani said: “We respect all points of view, and today we are part of the Arab system, and we are keen on perpetuating our relationship with the Arab Gulf states.”

He also revealed continuous efforts by Baghdad “to mediate between Saudi Arabia and Iran.”

“Bringing points of view between Iran and the countries of the region, including Saudi Arabia, is an approach that the government has followed and continues to follow, and will help ease tensions… which will impact the security of Iraq and the region,” he added.