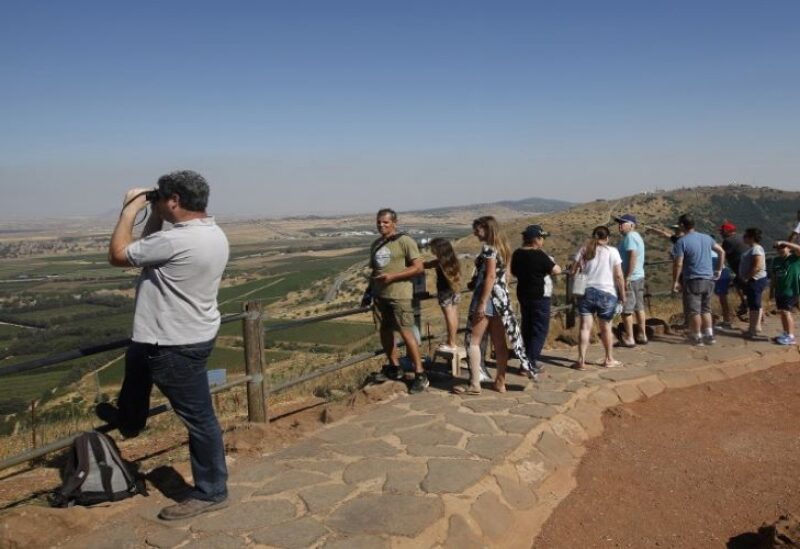 Syrians looking through a telescope in the Golan Heights village

Israeli Prime Minister Naftali Bennett said on Sunday that his government aims to quadruple the number of settlers living in the occupied Golan Heights as part of a multimillion-dollar plan to further solidify Israel’s control on the land it took from Syria more than five decades ago.

Bennett, speaking at a special Cabinet meeting in the Golan Heights, said the Trump administration’s acknowledgment of Israeli sovereignty over the expanse of territory, as well as the Biden administration’s assurance that it will not back down from that decision, motivated the fresh investment in the region.

Maintaining Israeli authority over the land would hinder any future efforts to reach a peace agreement with Syria, which claims the Golan Heights.

During the 1967 Mideast conflict, Israel conquered the Golan Heights and eventually annexed the land, encouraging settlement and agriculture and developing a booming local tourism economy.

The United States was the first country to acknowledge Israel’s sovereignty over the Golan Heights, which the rest of the international community considers to be Israeli-occupied territory.

Bennett claimed that the conflict in Syria made Israeli control of the land more acceptable to Israel’s foreign friends, claiming that the alternative would be far worse.

Israel has long contended that the strategically significant territory has been completely incorporated into Israel since it was conquered from Syria, and that control of the strategic plateau is required to safeguard Israel from Iran and its Syrian allies.

The Golan Heights is home to tens of thousands of Israelis as well as a number of historically Syrian Druze communities, some of which reject Israeli authority.