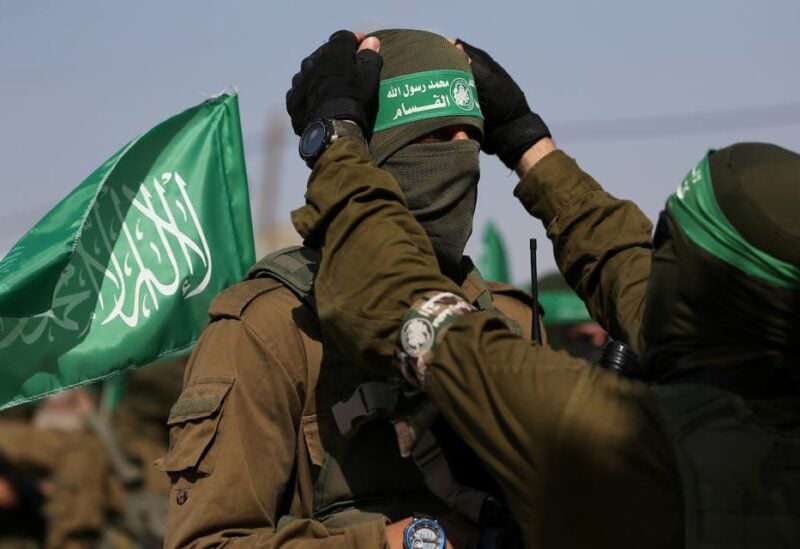 A Palestinian Hamas militant adjusts the mask and headband of his comrade during an anti-Israel military show in the southern Gaza Strip November 11, 2019. (Reuters)

Israel said Sunday it would punish Palestinians for the practice of paying militants for attacks by freezing tax payments it collects for the Palestinian Authority.

The amount withheld would balance the amount the PA pays to Palestinian attackers and their families.

The move, approved by the security cabinet of recently appointed Prime Minister Naftali Bennett, was likely to cause a crisis with the PA, who took action against similar measures in the past.

The cabinet was told the PA transferred 597 million shekels ($183 million, 154 million euros) “in indirect support of terrorism in 2020” in the form of payments “to terrorists and their families,” Bennett’s office said.

“These funds will be frozen on a monthly basis out of the payments that Israel transfers to the Palestinian Authority,” the statement added.

Israel collects around $190 million a month in customs duties levied on goods destined for Palestinian markets that transit through Israeli ports, and then it transfers the money to the PA.

In February 2019, Israel began withholding around $10 million a month, saying the amount corresponded to what the PA paid to families of Palestinians jailed for attacks against Israelis.

The cut prompted a crisis between Israel and the PA, with the Palestinians refusing to receive all funds for eight months.

Israel alleges the payments to those who have carried out attacks encourage further violence. The PA says the payments are a form of welfare to the families who have lost their main breadwinner.