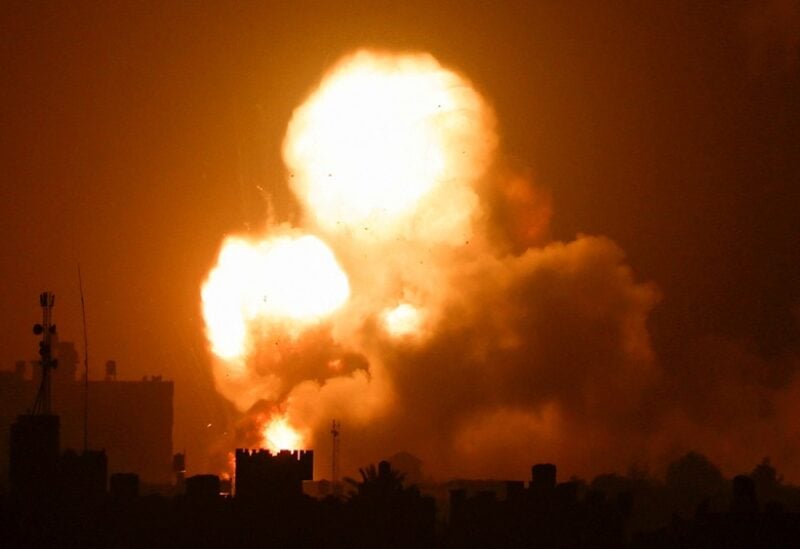 Flames and smoke rise during Israeli air strikes amid a flare-up of Israel-Palestinian violence, in the southern Gaza Strip, April 19, 2022 . REUTERS/Ibraheem Abu Mustafa TPX IMAGES OF THE DAY

The situation in Gaza Strip has witnessed further escalation, as Palestinian militants fired a rocket into southern Israel for the first time in months on Monday, prompting a retaliatory strike by the Israeli militaryas, after clashes at a sensitive holy site in Jerusalem.

Israel said it intercepted the rocket, and there were no immediate reports of casualties or damage. Israel holds Gaza’s militant Hamas rulers responsible for all such projectiles and usually launches airstrikes in their wake. It was the first such rocket fire since New Year’s Eve.
Early Tuesday, Israeli fighter jets carried out a series of airstrikes in southern Gaza Strip, targeting a “weapons manufacturing site” for Hamas, the Israeli military said. There were no reports of injuries.
Hours earlier, the leader of the Islamic group, which boasts an arsenal of rockets, had issued a brief, cryptic warning, condemning Israeli “violations” in Jerusalem.

Ziad Al-Nakhala, who is based outside the Palestinian territories, said threats to tighten an Israeli-Egyptian blockade on Gaza imposed after Hamas seized power 15 years ago “can’t silence us from what’s happening in Jerusalem and the occupied West Bank.”
However, no Palestinian group claimed responsibility for the rocket fire.
Palestinians and Israeli police clashed over the weekend in and around the Al-Aqsa Mosque compound in Jerusalem, which has long been an epicenter of Israeli-Palestinian violence. It is the third holiest site in Islam and the holiest for Jews, who refer to it as the Temple Mount because the mosque stands on a hilltop where the Jewish temples were located in antiquity.
Protests and clashes there this time last year helped trigger an 11-day Gaza war.
Police said they were responding to Palestinian stone-throwing and that they were committed to ensuring that Jews, Christians and Muslims — whose major holidays are converging this year — could celebrate them safely in the Holy Land. Palestinians view the presence of Israeli police at the site as a provocation and said they used excessive force.
Prime Minister Naftali Bennett said Monday, ahead of the rocket fire, that Israel has been the target of a “Hamas-led incitement campaign.”
The latest tensions come during the rare confluence of the Muslim holy month of Ramadan and the week-long Jewish holiday of Passover. Christians are also celebrating their holy week leading up to Easter. Tens of thousands of visitors have flocked to Jerusalem’s Old City — home to major holy sites for all three faiths — for the first time since the start of the coronavirus pandemic.
Jordan and Egypt, which made peace with Israel decades ago and coordinate with it on security matters, have condemned its actions at the mosque. Jordan — which serves as custodian of the site — summoned Israel’s charge d’affaires on Monday in protest.
Jordan’s King Abdullah II discussed the violence with Egyptian President Abdel Fattah El-Sisi, agreeing on “the need to stop all illegal and provocative Israeli measures” there, according to a statement. Jordan planned to convene a meeting of other Arab states on the issue.
Israel has been working to improve relations with Jordan over the past year and has recently normalized relations with other Arab states. But the latest tensions have brought renewed attention to the unresolved conflict with the Palestinians, which Israel has sought to sideline in recent years.
The US State Department urged all sides to “exercise restraint, to avoid provocative actions and rhetoric, and preserve the historic status quo” at the holy site. Spokesman Ned Price said US officials were in touch with counterparts across the region to try and calm tensions.
UN Security Council scheduled a closed-door meeting on the tensions for Tuesday.
In Israel, an Arab party that made history last year by joining the governing coalition suspended its participation on Sunday — a largely symbolic act that nevertheless reflected the sensitivity of the holy site, which is at the emotional heart of the century-old conflict.
Israel captured the West Bank, along with the Gaza Strip and east Jerusalem — which includes the Old City — in the 1967 Mideast war. The Palestinians seek those territories for a future independent state. Israel annexed east Jerusalem in a move not recognized internationally and is building and expanding Jewish settlements across the West Bank, which it views as the biblical and historical heartland of the Jewish people.
The last serious and substantive peace talks collapsed more than a decade ago.
The Palestinians have long feared that Israel plans to take over or partition the mosque compound. In recent weeks, calls by Jewish extremists to sacrifice animals there have circulated widely among Palestinians on social media, sparking calls to defend the mosque.
Israeli authorities say they have no intention of changing the status quo, and police are enforcing a prohibition on animal sacrifices. Israel allows Jews to visit the site but not to pray there. In recent years large numbers of nationalist and religious Jews have regularly visited under police escort, angering the Palestinians and Jordan.
Israel says police were forced to enter the compound early Friday after Palestinians stockpiled stones and hurled rocks at the gate through which Jewish visitors typically enter. That gate also leads to the Western Wall, the holiest site where Jews can pray.
Recent weeks have seen a series of Palestinian attacks inside Israel that killed 14 people. Israel has launched near-daily arrest raids and other military operations in the occupied West Bank that it says are aimed at preventing more.
The military said Monday it arrested 11 Palestinians in operations across the territory overnight. In a raid near the city of Jenin, the army said dozens of Palestinians hurled rocks and explosives toward troops.
Soldiers “responded with live ammunition toward the suspects who hurled explosive devices,” the military said. The Palestinian Health Ministry said two men were hospitalized after being critically wounded.
Two of the recent attackers came from in and around Jenin, which has long been a bastion of armed struggle against Israeli rule.
At least 26 Palestinians have been killed by Israeli forces in recent weeks, according to an Associated Press count. Many had carried out attacks or were involved in clashes, but an unarmed woman and a lawyer who appears to have been a bystander were also among those killed.