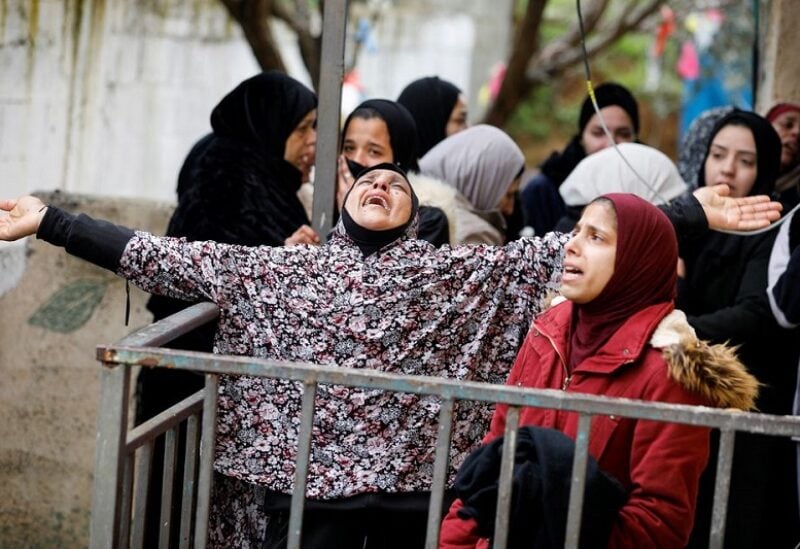 Relatives of Palestinian Nader Ryan, who was killed by Israeli forces during clashes, react at his funeral in Nablus in the Israeli-occupied West Bank March 15, 2022. REUTERS/Raneen Sawafta

Israeli forces shot dead two Palestinians in the occupied West Bank on Tuesday, the Palestinian Health Ministry said, in what Israeli border police described as clashes that erupted during a raid to detain suspected militants.

The Israeli border police said that during an operation in a refugee camp in the northern West Bank, a gunman fired at undercover officers who shot back, “neutralising” him.

In a second refugee camp near Jerusalem, border police said forces on a separate arrest raid encountered hundreds of Palestinians who threw heavy objects from rooftops, endangering the troops.

It was not immediately clear whether the Palestinian killed there had taken part in the clash.

In Gaza, a spokesperson for the ruling Palestinian Islamist group Hamas, Hazem Qassem, said: “We are witnessing a new uprising, a new era of the struggle that aims to end the existence of the occupation on this land.”

Israel captured the West Bank, Gaza Strip and East Jerusalem – territories where Palestinians seek statehood – in the 1967 Middle East war. The last round of peace talks collapsed in 2014.

The Palestinian Authority, set up under interim peace accords with Israel in the 1990s, exercises limited self-rule in the West Bank, but Israeli forces are dominant in the area, where they often carry out raids to detain suspected militants.