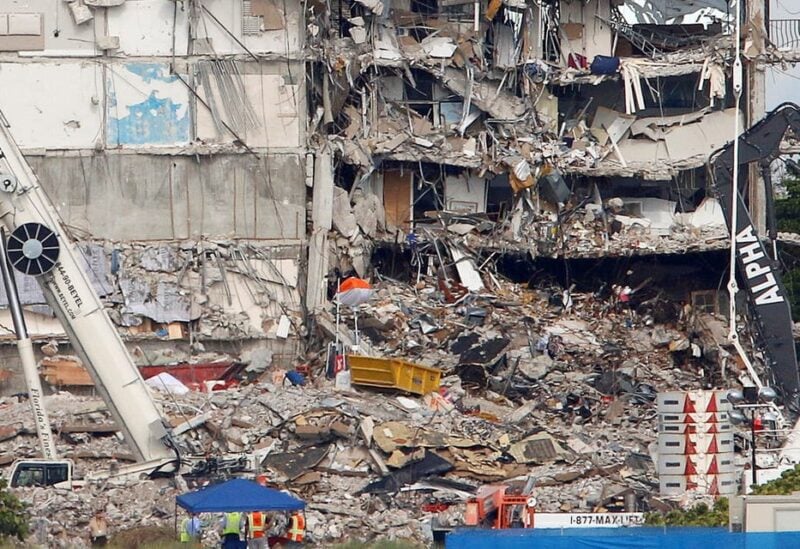 Rescue efforts are halted at the site of a partially collapsed residential building in Surfside, near Miami Beach, Florida, US July 1, 2021. (Reuters)

An Israeli search and rescue team that arrived in South Florida shortly after the Champlain Towers South collapsed last month was heading home Sunday after an emotional sendoff in Surfside.

During a brief ceremony on Saturday evening, Miami-Dade Mayor Daniella Levine Cava thanked the battalion for their “unrelenting dedication” and presented them with an honorary “key to the county.”

Members of the task forces that have been searching the site 24 hours a day since the June 24 collapse lined both sides of the street, shaking hands and bidding farewell to the Israeli team.

On Saturday, officials raised the confirmed death toll to 86, with 43 people still missing in the rubble of the 12-story building. While authorities have concluded that there was “no chance of life” in the remaining rubble, the pressure remains for search crews to find victims so families can lay their loved ones to rest.

The Israeli team joined other task forces from around the US to assist the teams from Miami and Miami-Dade County, working in 12-hour shifts. They have searched through South Florida’s intense summer heat, and in pouring rain, pausing only when lightning was spotted nearby. They also paused operations as officials made plans to implode the still-standing portion of the condo tower on July 4.

The Israeli team used blueprints of the building to create detailed 3D images of the disaster site to aid in the search. They also gathered information from families of the missing, many of who were Jewish, to build a room-by-room model laying out where people would have been sleeping during the pre-dawn collapse.