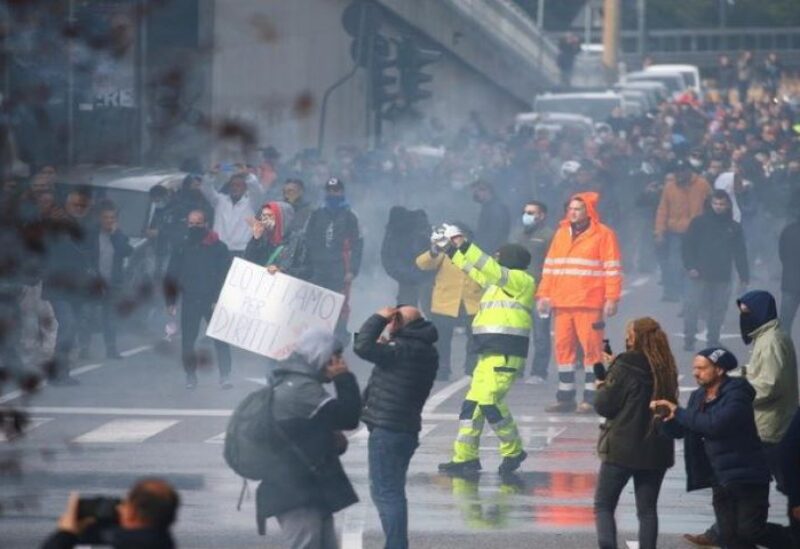 On Monday, Italian police used water cannon and tear gas to clear a sit-in at the port of Trieste, where opponents of the government’s mandatory COVID-19 health pass have tried to block access.

The northeastern port has been the focal point of protest in Italy over the introduction of new rules last Friday that require all workers either to show proof of inoculation, a negative coronavirus test or recent recovery from infection.

Police in full riot gear moved in on Monday morning after several hundred dock workers interrupted access to one of the main gates at Italy’s largest commercial port.

The crowds were pushed aside by jets of water followed by volleys of tear gas. Many of them headed towards the city’s main square to continue their protest in front of government offices.

“They attacked us. I am speechless. I never expected it,” said Stefano Puzzer, the spokesman of the port protesters. “We will sit down here. We are keeping calm. We will not give up.”

The government says the mandatory health ‘Green Pass’ is needed to keep workers safe and to encourage more people to get vaccinated. Under the rule, effective until year-end, workers will be suspended without pay and face a fine of up to 1,500 euros ($1,730) if they try to work without the certificate.

Most Italians support the provision, opinion polls show, but a vocal minority says it impinges on core labour rights.

Some 15% of private and 8% of public sector workers have no Green Pass, according to a government document seen by Reuters last week.