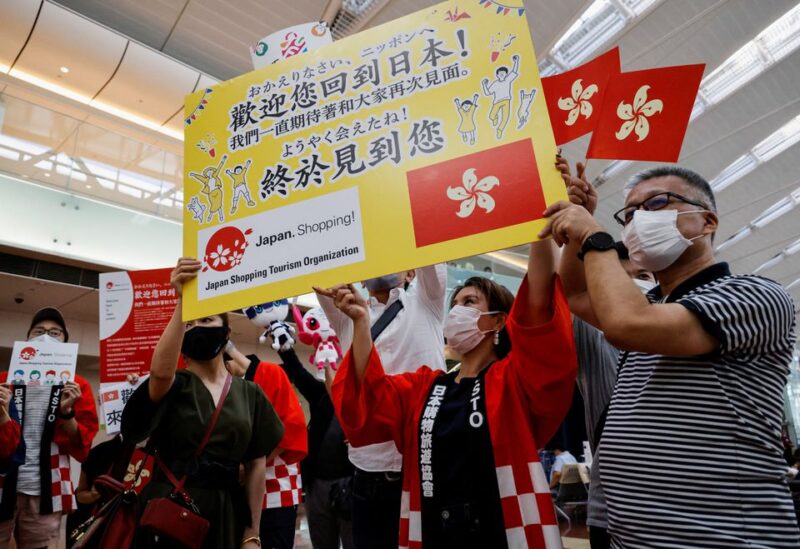 Members from Japan's shopping and tourism companies hold a placard reading 'Welcome back to Japan! We finally met you!' after two years of coronavirus disease restrictions, in Tokyo, Japan, June 26, 2022 REUTERS

After more than two years of epidemic isolation, Japan opens its doors to tourists this week, but prospects for a tourism boom face stiff headwinds due to closed stores and a scarcity of hospitality employees.

Japan will reintroduce visa-free travel to dozens of countries beginning Tuesday, removing among of the world’s harshest border controls in an effort to curb the spread of COVID-19. Prime Minister Fumio Kishida expects tourism to boost the economy and enjoy some advantages from the yen’s drop to a 24-year low.

Arata Sawa is among those eager for the return of foreign tourists, who previously comprised up to 90% of the guests at his traditional inn.

“I’m hoping and anticipating that a lot of foreigners will come to Japan, just like before COVID,” said Sawa, the third-generation owner of the Sawanoya ryokan in Tokyo.

Just over half a million visitors have come to Japan so far in 2022, compared with a record 31.8 million in 2019. The government had a goal of 40 million in 2020 timed with the Summer Olympics until both were upended by the coronavirus.

Kishida said last week the government is aiming to attract 5 trillion yen ($34.5 billion) in annual tourist spending. But that goal may be too ambitious for a sector that has atrophied during the pandemic. Hotel employment slumped 22% between 2019 and 2021, according to government data.

Spending from overseas visitors will reach only 2.1 trillion yen by 2023 and won’t exceed pre-COVID levels until 2025, wrote Nomura Research Institute economist Takahide Kiuchi in a report.