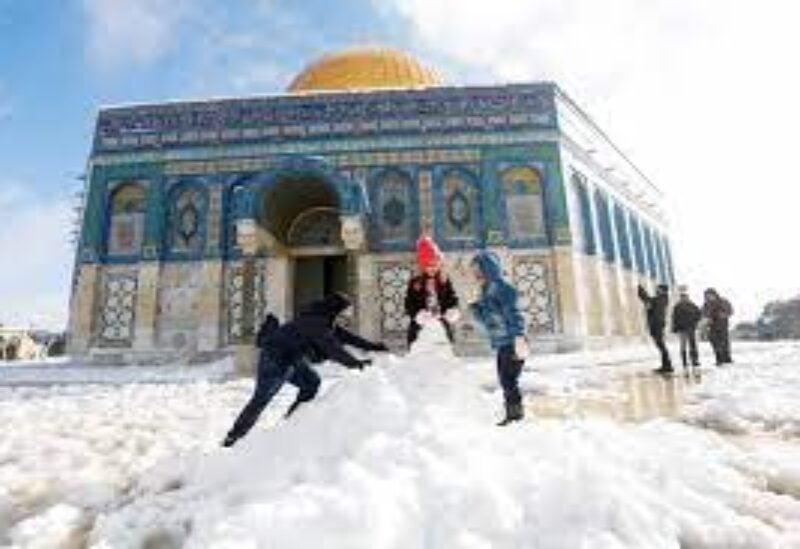 Worshippers had to slog through inches of snow to reach Jerusalem’s walled Old City’s sacred landmarks, including the snow-capped Dome of the Rock and the Western Wall.

Because heavy snowfall is uncommon in the city, youngsters flocked to the streets to watch the flakes fall and throw snowballs at one other.

Abed Shabany, 39, took his two boys to a hill overlooking Jerusalem to play. While he reversed his Jeep through inches of slush, other parents stayed warm by boiling coffee in their boots using gas canisters.

“I haven’t seen anything like this for years,” he said. “There’s no school today so I’m just going around with the kids making snowmen and snowballs. I think it’s a good sign. It will be a good year, I hope.”

Municipality cherry-pickers were out in the city center, sawing off broken and dangerous branches, with much less traffic on the roads than usual.

Police closed off several main highways leading to Jerusalem, and bus services inside the city were suspended.

Throughout the night, 210 snow ploughs worked to clear the city streets, Jerusalem Mayor Moshe Lion told Israel Army Radio on Thursday morning. The snow piled up to a height of about 20 centimeters (8 inches), according to Israeli media.

Before arriving in Jerusalem, the winter storm swept through the Mediterranean region, from Greece across Turkey and into Syria.