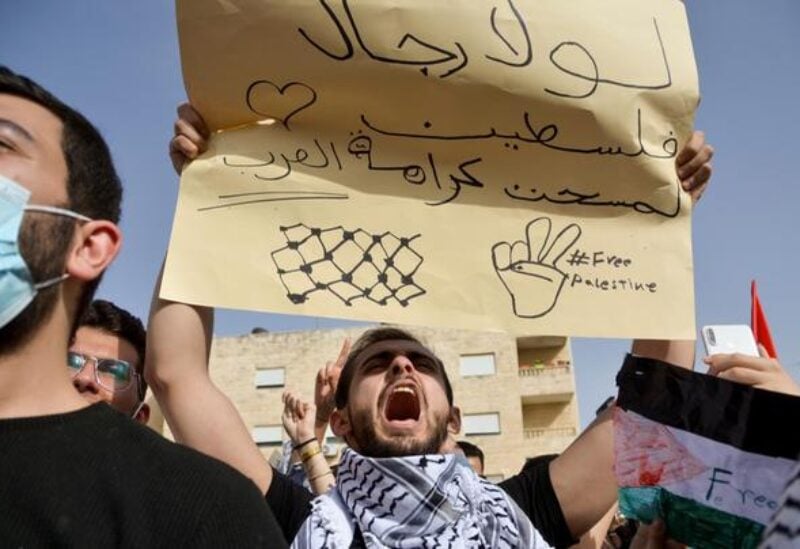 Jordanian police fired tear gas and shot into the air to halt about 500 young demonstrators, who broke away from the scheduled route of a march near the borders organized to protest Israeli attacks against Palestinians.
The demonstrators were within five km (three miles) of the King Hussein Bridge, known in Israel as the Allenby Bridge, in the Jordan Valley opposite the Palestinian city of Jericho in the Israeli-occupied West Bank.
Witnesses said about 2,000 people took part in the protest, arranged by a mix of opposition parties and tribal groups in a kingdom where passions are running high since the escalation of violence between Palestinians and Israel.
“Oh King Abdullah, open the borders,” protesters chanted.
Several thousand demonstrators also took to the streets after Friday prayers from the main Husseini mosque in central Amman chanting anti-Israel slogans.
They called for the expulsion of the Israeli ambassador and scrapping of an unpopular peace treaty with Israel.
Hundreds of mosques held prayers for those killed in Gaza.
Most of Jordan’s 10 million citizens are of Palestinian origin. They or their parents were expelled or fled to Jordan in the fighting that accompanied the creation of Israel in 1948.
They have close family ties with their kin on the other side of the Jordan River in the West Bank and East Jerusalem, both captured by Israel in the 1967 Arab-Israeli war. Reuters