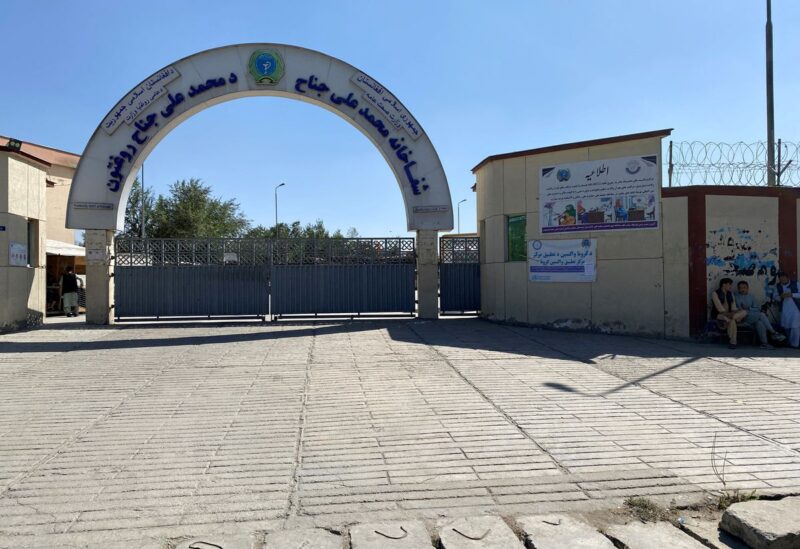 A view of an entrance of Mohammad Ali Jinah Hospital, following a suicide attack at tutoring center, in the Dasht-e-Barchi district in west Kabul, Afghanistan September 30, 2022. REUTERS/Sayed Ramin/File Photo

In recent weeks, Raihana, 19, was up till midnight studying for Afghanistan’s university admission exam, a chance for women to further their education despite the Taliban government’s increasing restrictions. Raihana aspired to be a doctor and was studying for the exam.

Her careful planning came to a stop on Friday when a suicide bomber detonated his explosives during a practice test in the girls’ section of a crowded room at Kaaj Education Institute, a private tutoring center in the Afghan capital Kabul.

Raihana’s father, a shopkeeper, rushed her to hospital but she did not survive.

“She was always saying, ‘If you have a chance, you shouldn’t miss it, and you have to do your best.’ But she didn’t know she was going to be martyred,” said her aunt Khatera, who asked that her full name not be used for fear of retribution.

Young women like Raihana, denied opportunities for a standard secondary education under the Islamist Taliban who seized power a year ago, comprised many of the victims in the blast at the private centre.

Residents of the neighbourhood who had family members, friends and neighbours killed, injured and emotionally shaken described to Reuters a violent setback for young women seeking an education against already difficult odds.

The blast hit the West Kabul area, home to many, like Raihana, of the Hazara minority community of mostly Shi’ite Muslims in Sunni-majority Afghanistan. Hazaras have been targeted in past attacks launched by the ultra-radical Islamic State and others.

No one has claimed responsibility for Friday’s blast.

With girls’ secondary schools closed, “Our last hope was educational institutions. Unfortunately now the institutes are also under threat,” said Sakina Nazari, a 25-year-old resident and former Kaaj student whose family friend was badly injured in the attack.

Girls’ secondary schools have been closed in most provinces, including Kabul, since the Taliban took over in August 2021. The leadership backtracked on promises to open all schools in March.

Private tutoring centres such as Kaaj have provided a lifeline to girls wanting to further their education and a chance to go to universities, where women are still allowed, though they face increased restrictions and growing economic challenges.

Male students were also sitting Friday’s mock exam but, according to the Taliban source and a witness, the attacker went to the part of the class where young women sat separated from their male peers, resulting in high female casualties.

“Young women from Afghanistan’s Hazara Shia community reportedly make up (the) majority of (the) 60-plus killed and injured,” the United Nations Mission to Afghanistan said in a statement. “Those responsible must face justice. Taliban must fulfil obligations to ensure safety of all Afghans.”

The U.N. mission said at least 35 people had been killed and 82 injured. Police have confirmed 19 killed and 27 wounded, but health workers and the Taliban source say the toll is higher and that many of the injured were in serious condition.

Taliban officials condemned the attack, saying the group would find the perpetrators and bring them to justice.

The Hazara community has been the target of a series of attacks, some claimed by Islamic State, including under the Republic that the Taliban overthrew.

“This is not the last one and this is not the first one,” said Sakina Yousufi, a volunteer education advocate from the area. Families, many from modest backgrounds who gave everything to educate their children during the country’s economic crisis, wanted their daughters educated but were becoming scared, she said.

“Many people are afraid to send their children, their girls to go to a (private education) course or university,” she said. “There is a big challenge to go to school … and now there are only more challenges.”

Raihana’s aunt said the family had vowed that all the children, including Raihana’s sister, would study to avenge her death.

“They want to stop us from learning by such actions and killing, but they will never stop us,” she said.