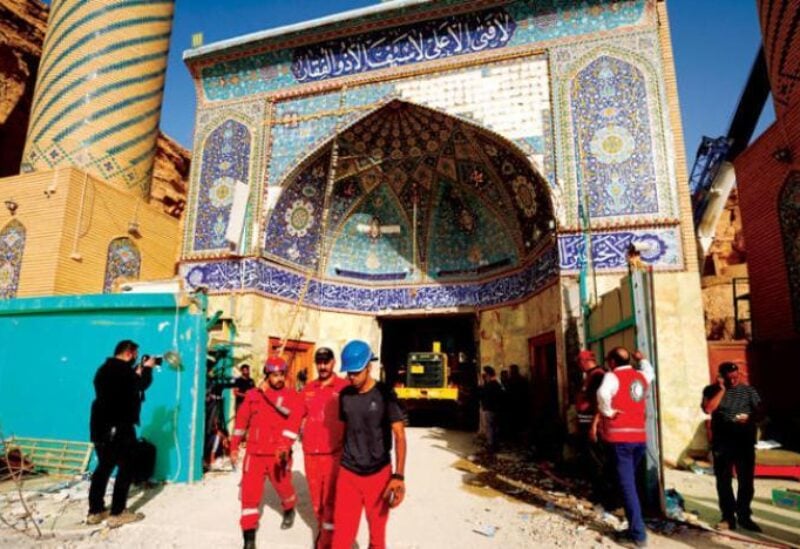 Rescue workers continue to search for bodies after the collapse of the religious shrine in Karbala, Iraq (AP)

Nasif al-Khattabi, governor of Iraq’s Karbala region, has officially formed an investigation committee to probe a landslide that struck the Qattarat al-Imam Ali shrine on Saturday.

The landslide had hit the ceiling of the Qattarat al-Imam Ali, which then collapsed on top of Shia pilgrims inside. According to an unfinalized count of victims, seven were killed and seven were injured.

The Iraqi Health Ministry revealed that the victims included women and children.

Governor Khattabi stipulated that members of the investigation committee seek the assistance of the head of the branch of the Geologists Syndicate in Karbala, given the nature of the limestone shrine area, which is close to the Razzaza lake.

On Monday, the General Civil Defense Directorate said it was looking for the last body under the rubble at the shrine.

Eyewitnesses reported that an eighth body, belonging to a woman pilgrim, was still under the rubble. By exhuming the body, the number of victims will rise to eight.

The General Civil Defense Directorate had reported earlier that the landslide was likely caused by an earth mound next to the shrine collapsing due to high humidity.

Local and federal authorities faced severe criticism and accusations of neglect and lack of care for people’s lives for not following up on religious shrines that are run by unofficial groups.

Some sources talk about the presence of about 3,000 religious shrines that were built in recent years that are not recognized by the Shiite Endowment authorities.