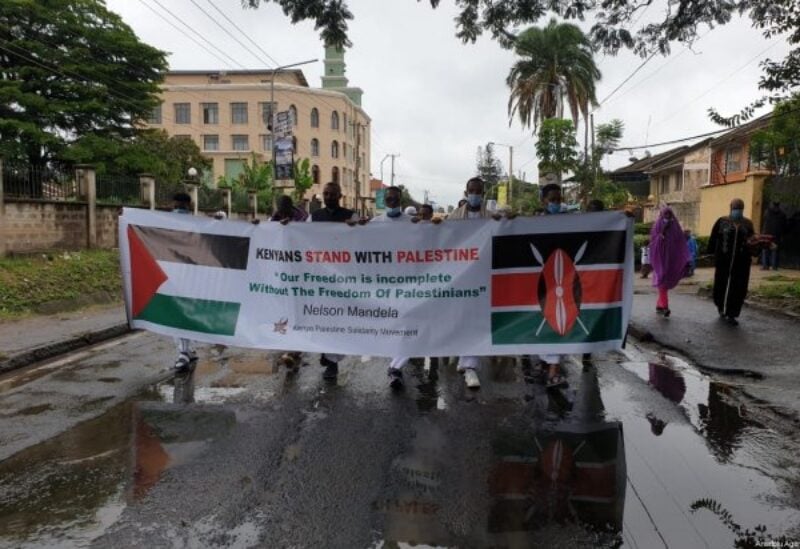 Police in Kenya on Thursday fired tear gas bombs to disperse more than 200 people protesting in the capital, Nairobi, against the Israeli bombing of the Gaza Strip.

The march began after Eid Al-Fitr prayers at a nearby mosque. An eyewitness told Reuters that several protesters had been arrested.

Protesters waved banners with the Palestinian flag reading “Kenyans support Palestine” and “Our freedom is incomplete without the freedom of the Palestinians – Nelson Mandela.”

Rayan Sheikh, a demonstrator, expressed: “I support my brothers and sisters in Palestine, and I pray day and night for them to enjoy peace.”

The Israeli airstrikes on the Gaza Strip caused dozens of deaths  since the escalation of violence on Monday, while several people in Israel were killed by rockets fired by the Islamic Resistance Movement Hamas.

Just before tear gas was fired to disperse the protesters, anti-corruption and human rights activist Boniface Mwangi stated: “Israel is the last apartheid nation in the world.”

He added: “The apartheid regime in South Africa would not have fallen without international pressure. Our silence gives Israel a justification for what it is doing.”

Some critics of Israeli policies against the Palestinians, including Human Rights Watch, have accused the occupation of implementing a form of apartheid. Israel rejects the comparison.