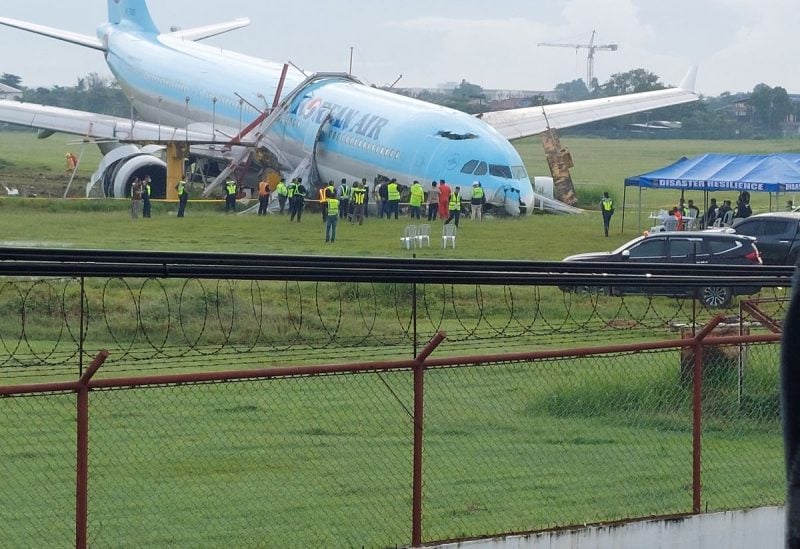 Response crews gather around a Korean Air Airbus A330 widebody flying from Seoul to Cebu, which tried to land twice in poor weather before it overran the runway on the third attempt on Sunday, in Lapu-Lapu City, Cebu, Philippines October 24, 2022 - Reuters

At Cebu International Airport in the Philippines late on Sunday, a Korean Air Lines Co Ltd flight carrying 173 people overshot the runway, the airline reported. It added that there were no casualties and everyone on board had successfully evacuated.

Insufficient weather forced the Airbus SE A330 widebody travelling from Seoul to Cebu to undertake three landing attempts before it overran the runway at 23:07 (1507 GMT), according to a statement released by Korean Air on Monday.

“Passengers have been escorted to three local hotels and an alternative flight is being arranged,” the airline said of flight KE361. “We are currently identifying the cause of the incident.”

Video from the scene verified by Reuters showed widespread damage to the plane. The nose landing gear appeared to have collapsed.

Korean Air President Keehong Woo issued an apology on the airline’s website, saying a thorough investigation would be carried out by Philippine and South Korean authorities to determine the cause.

According to flight-tracking website FlightRadar24, which reported that other planes to Cebu had been diverted to other airports or returned to their origin, the A330-300 jet involved in the disaster was delivered brand-new to Korean Air in 1998.

On its Facebook page, the Cebu airport said that it has temporarily blocked the runway to allow for the plane’s evacuation, canceling all incoming and outgoing flights till further notice.

Korean Air has not had a fatal passenger crash since 1997, according to Aviation Safety Network, a website that compiles aviation accidents.