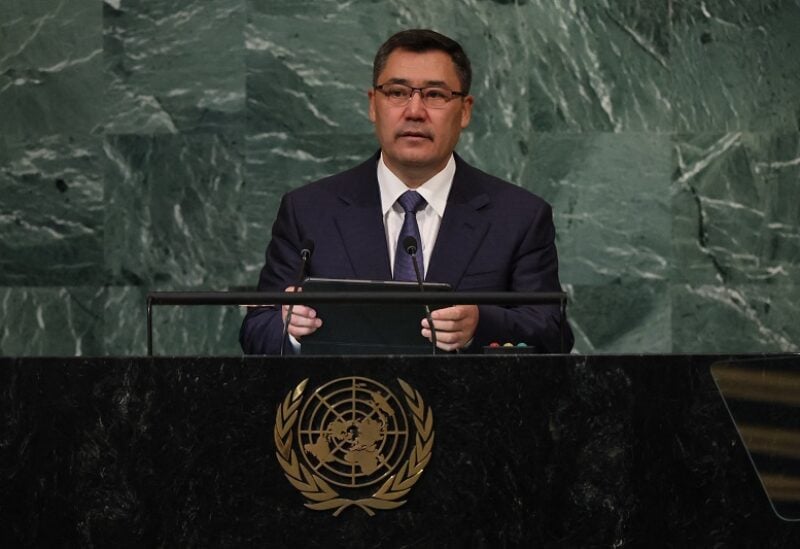 Kyrgyzstani president said on Tuesday that his country always strives to resolve its international disputes by peaceful means.

“In international relations, we always refrain from the threat or use of force against the territorial integrity or political independence of any state,” Sadyr Japarov said in his address at the 77th session of the UN General Assembly in New York.

Speaking on the latest incidents on the border with Tajikistan, Japarov said: “Despite all previous negotiations and agreements, the Tajik side with ill intention attacked the border and civilian objects along the entire perimeter of the Kyrgyz-Tajik state borders.”

About 240,000 Kyrgyz civilians have been evacuated from the border settlements, and they are now being provided with necessary assistance, he added.

“We are deeply saddened by the unjustified armed aggressions by Tajikistan, even though there are international agreements and obligations that have been established between our countries,” Japarov noted.

“From the very beginning of work on the settlement of border issues between the two states, the Kyrgyz side has always acted in full compliance with its international obligations, including bilateral ones, conducted negotiations in a constructive manner, offering a mutually beneficial compromise,” according to Japarov.

“We are convinced that all border and internal issues should be resolved over the negotiation table,” he added.

Japarov also expressed his “sincere gratitude” to the UN system and the partner countries for their solidarity and support.

Kyrgyzstan and Tajikistan have signed a protocol to end border clashes that claimed scores of lives, Kyrgyz media reported on Tuesday.

In line with earlier agreements on cease-fire and de-escalation, the deal signed on late Monday envisions total termination of hostilities, withdrawal of troops and military equipment to their permanent duty stations, joint inspection of border outposts and command posts, and a thorough investigation of the armed clashes, according to AKIpress news agency.

Clashes broke out at a disputed section of the border in Kyrgyzstan’s Batken region on Sept. 14, with both sides accusing each other of breaching the truce.