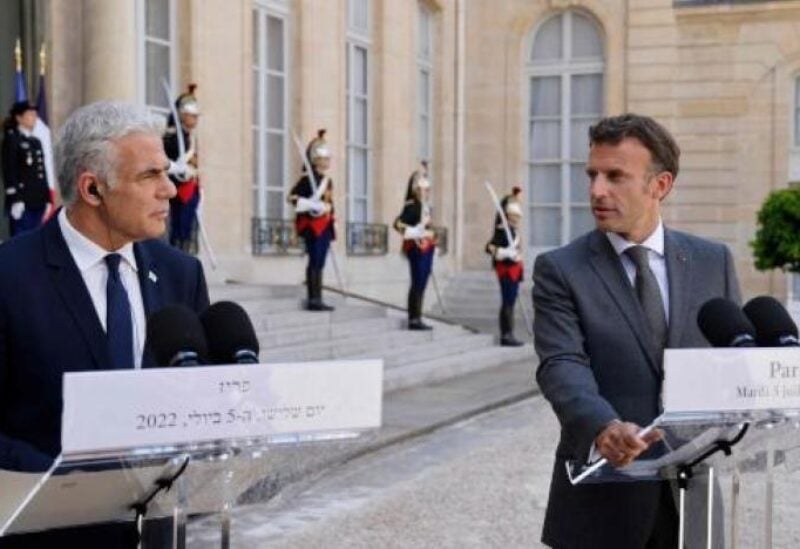 Israeli Prime Minister Yair Lapid said he does not oppose meeting Palestinian President Mahmoud Abbas, however he noted that there are no current plans on the agenda.

“I do not have meetings for the sake of meetings unless they have a positive result for Israel. At the moment, it is not on the agenda, but I do not rule it out,” Lapid said in a briefing at Israel’s embassy in Paris.

A source who accompanied Lapid on his visit to France Tuesday confirmed that President Emmanuel Macron expressed his surprise at the decision of former Prime Minister Naftali Bennett to refrain from engaging in negotiations on the Israeli-Palestinian conflict.

Macron asked Lapid to bring about a change in the Israeli policy.

According to the same source, Lapid explained the conditions of the government, which is formed of eight parties, including the extreme right, the liberal center, the left, and the Arabs.

He said that the main task before him was to save Israeli democracy from Benjamin Netanyahu, adding that Gantz and several ministers in the Israeli government met with their Palestinian counterparts.

Lapid did not personally hold meetings with senior Palestinian leaders to avoid any political issues that could affect the cabinet, stressing that he has no problem in principle in holding such meetings.

The Israeli PM voiced his support for the two-state solution as the best solution, but he does not intend to take any step that would affect this solution.

He indicated that the current government would not be able to achieve progress in negotiations with the Palestinians and they are aware of that.

Bennett, leader of the Yamina party, and Gideon Saar, head of the New Hope party, had stipulated refraining from negotiating with the Palestinians to enter the government.

They agreed to hold meetings between ministers and officials of the Palestinian Authority (PA), provided they did not include negotiations.

Gantz, and a delegation that included three ministers from the Meretz party, met with Abbas several times.

Several meetings were held between health, energy, and economy ministers from both sides.

Political sources in Tel Aviv indicate that the US administration wants Lapid to change the government’s approach to the Authority.

US officials understand the Israeli position, but they would like to see some positive action that would leave hope, and President Joe Biden is expected to speak with Lapid on this matter, according to political sources in Tel Aviv.