Migrants return to UK processing centre after being left in London 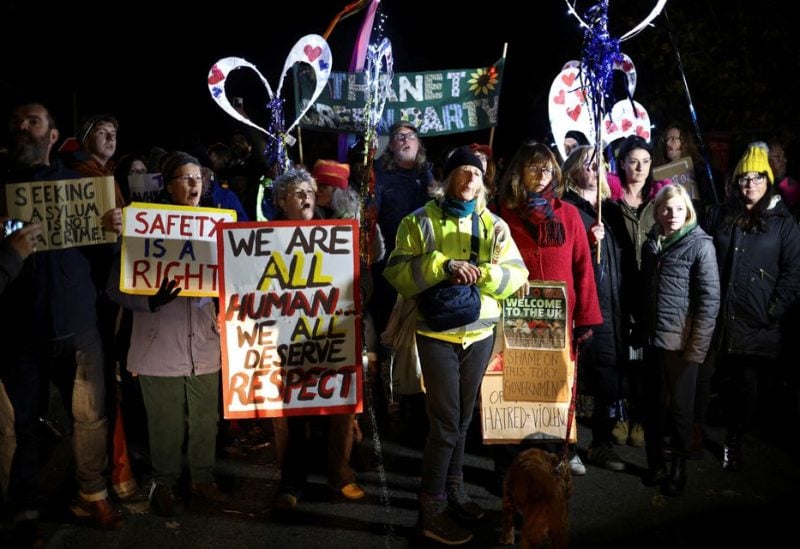 People hold a vigil calling for the immigration processing centre to be closed in Manston, Britain, November 2, 2022. REUTERS/Henry Nicholls

Three Afghan asylum seekers who were transported to London from a jam-packed migrant processing facility in southeast England voluntarily returned to the location on Wednesday after being left without a place to stay, according to a Reuters photographer.

The Manston camp in Kent, which is running at more than double its capacity with people staying much longer than the planned 24-hour period and sleeping on mats on the floor, is putting pressure on the British authorities.

Immigration minister Robert Jenrick said the numbers at the site had fallen “substantially” on Tuesday and would continue as work continued to move migrants to other accommodation.

Two British newspapers reported on Wednesday that a group of about 40 migrants from Manston were dropped at a coach station in central London on Tuesday. They reported that while about 30 had family or friends they were able to contact to stay with, 11 were left with no accommodation and were helped by a charity worker.

They cited a British Transport Police spokesperson who said police had responded to reports of a group of asylum seekers looking for assistance at Victoria station late on Tuesday.

“Officers engaged and liaised with charity partners, rail staff, and government colleagues to help them find accommodation for the evening,” the spokesperson was quoted as saying.

A Reuters photographer outside the Manston processing centre said three Afghan men who said they were taken to London on Tuesday but left with nowhere to stay returned to the site in Kent on Wednesday evening as they had no other shelter.

The Home Office, Britain’s interior ministry, did not have an immediate comment.

Home Secretary Suella Braverman has been accused of failing to listen to legal advice on prolonged detention at the centre, a claim she has denied. An independent inspector said one Afghan family last week told him they had been there 32 days.

Jenrick told Sky News on Wednesday the Home Office was facing legal action over the centre.

“I believe we have received the initial contact for a judicial review,” Sky quoted him as saying.