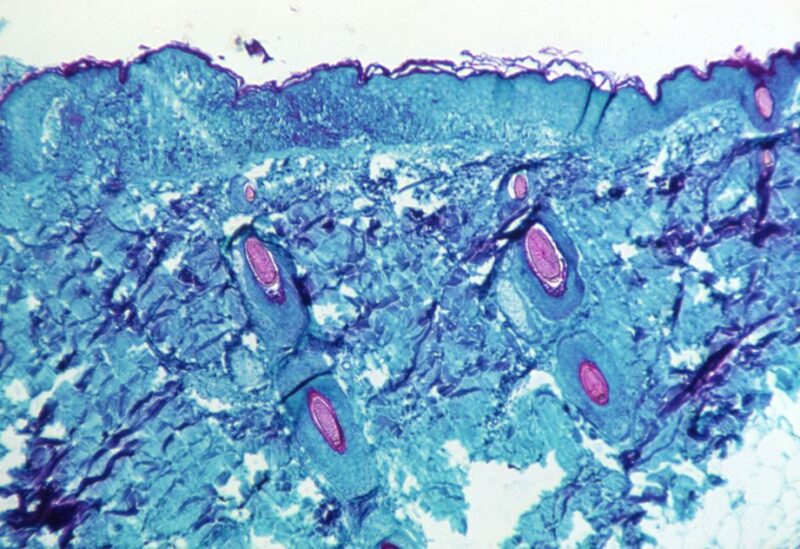 A section of skin tissue, harvested from a lesion on the skin of a monkey, that had been infected with monkeypox virus, is seen at 50X magnification on day four of rash development in 1968. CDC/Handout via REUTERS

As of Monday, California recorded 827 monkeypox infections, the second-largest tally in the US after New York’s 1,390 cases, according to the Centers for Disease Control and Prevention.

What does the announcement mean?
Newsom said the move would help the country’s most-populous state seek more vaccines and spread knowledge about the disease and treatment.

“We’ll continue to work with the federal government to secure more vaccines, raise awareness about reducing risk, and stand with the LGBTQ community fighting stigmatization,” Newsom said in a statement announcing his declaration.
The declaration allows emergency medical personnel to administer monkeypox vaccines that are approved by the federal government. A recent law also allows pharmacists to administer the jab.

So far, some 25,000 doses have been administered in California.

The governor’s office said the state is building on the steps developed during the COVID-19 pandemic to set up vaccination clinics.

Since the beginning of May, the WHO has reported over 20,000 cases in nearly 78 countries.

The disease has been endemic to parts of Africa for decades, but recently leaped to Europe and North America as well as other areas of the world.

Monkeypox is rarely fatal. But India and Peru both reported on Monday the death of two patients.

Spain reported two deaths last week, while another was recorded earlier in Brazil.

The disease spreads through close physical contact. Most reported cases have been in men who have sex with men, but health experts have emphasized that anyone can contract the virus — and is transmitted through prolonged skin-to-skin contact, including sharing towels and bedding.

The outbreak has prompted calls from LGBTQ advocates for officials to step up their efforts to tackle the crisis and inform the public.

Monkeypox symptoms, including fever, muscle pain and a rash that forms blisters, are generally less severe than smallpox.