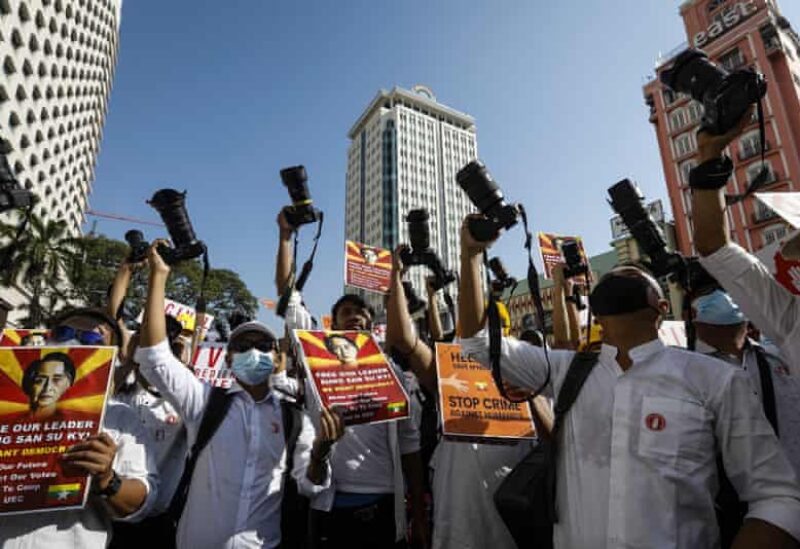 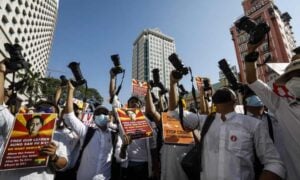 Myanmar’s military has repeated its promise to hold new elections and relinquish power as anti-coup protests continue across the country.

Army spokesman Brig Gen Zaw Min Tun once again claimed that the military took control after alleged voter fraud, but did not provide any evidence.

He also said a second criminal charge had been filed against the detained opposition leader Aung San Suu Kyi.

Mass protests have been taking place since the military coup on 1 February.

The military has heightened its presence on the streets and deployed armoured vehicles in several cities in recent days in further signs of a potential crackdown on opposition demonstrations.

In the military’s first news conference since toppling the government, spokesman Zaw Min Tun said the armed forces would not remain in power for long, and promised to “hand power back to the winning party” following a planned election. He did not provide a date for the vote.

Addressing reporters in the capital Nay Pyi Taw on Tuesday, Zaw Min Tun said an additional charge had been filed against Ms Suu Kyi, saying only that it related to an alleged violation of the country’s Natural Disaster Law.

Zaw Min Tun said Ms Suu Kyi had been confined to her home for her own safety, and that she was comfortable and healthy. He used the news conference to accuse anti-coup protesters of violence and intimidation against the security forces.

A police officer had been wounded by “lawless actions” and had later died from his injuries, he said.

Protesters have clashed with security officers and there have been recent reports of police using tear gas and rubber bullets to disperse crowds. One protester is in critical condition after being shot in the head.

Mya Thwe Thwe Khaing, 19, was hurt while taking part in a protest – though it is not clear exactly what she was hit by. Rights groups say her wound is consistent with one from live ammunition.

Zaw Min Tun said some measures taken to control crowds of protesters were in response to bricks being thrown at police.

The UN has warned Myanmar’s military – which on Monday announced penalties of up to 20 years in prison for those opposing the coup leaders – that there would be “severe consequences” for any brutal suppression of the ongoing anti-coup protests there.