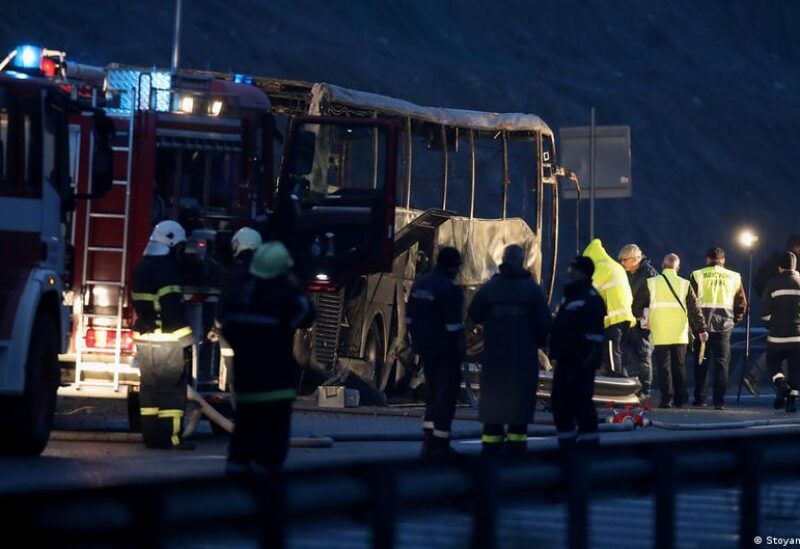 Hundreds of mourners gathered at a Macedonian rural cemetery on Friday in the freezing rain to put to rest 10 locals, including eight youngsters, who were among 45 people killed in a bus tragedy in Bulgaria.

In the early hours of Nov. 23, a bus carrying tourists returning to North Macedonia from a weekend excursion to Istanbul caught fire on a highway. All of the fatalities were ethnic Albanians from North Macedonia.

According to Bulgarian authorities, human error was most likely the primary cause of the disaster.

Green coffins containing 10 victims were lowered into the ground at the Morane village cemetery – all four children of Enver Jahi, his wife, his sister-in-law and her two children, and two children of one of Jahi’s sisters – all from Morane.

Arlinda Vlashi, a teacher to Omer Jahi, 11, who was buried next to his three siblings and their mother, came to pay her respects. “How can I go to class now when I don’t see him?” she said tearfully.

“I was Omer’s new teacher when he started sixth grade (in September). He was a very nice boy, very wise, very polite and he was learning quickly.”

Enver Jahi, who did not go on the trip to Istanbul because he had to run the family restaurant, stood weeping in the rain as the caskets were buried, followed by an imam’s prayers.

“This was very bad news for us. Not only for me but for the entire village,” said Nuredin Bajrami, a neighbour of the Jahi family. “We knew them very well, they also had a restaurant and people visited them very often. They were very good people.”

The bodies of the other crash victims arrived in two Bulgarian military planes on Friday afternoon at the airport of North Macedonia’s capital Skopje. They were buried at various cemeteries across the Balkan country during the afternoon.