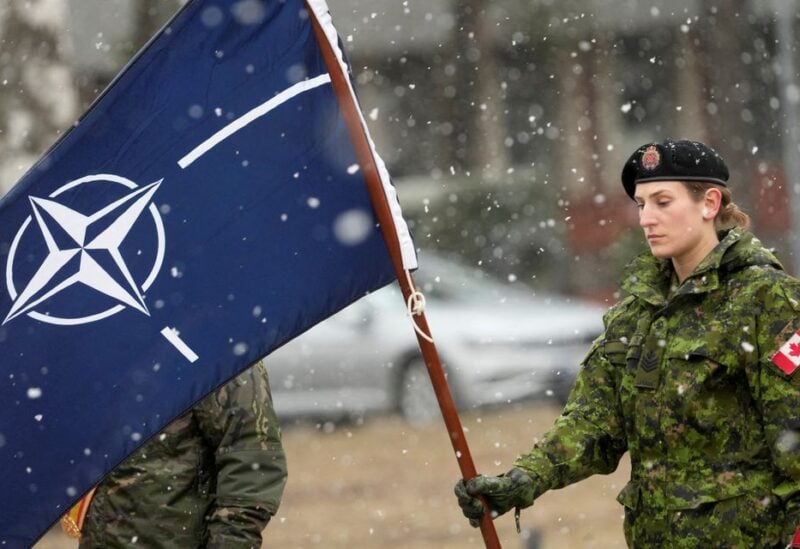 A member of the military holds a flag as they wait for the arrival of Canadian Prime Minister Justin Trudeau along with NATO Secretary-General Jens Stoltenberg in Adazi, Latvia, March 8, 2022.

The United States and other NATO members said on Wednesday they would keep helping Ukraine fight off Russia’s invasion, while also adapting the alliance’s own security to the “new reality” triggered by the war.

Diplomats and military analysts estimate that NATO allies have sent more than 20,000 anti-tank and other weapons to Ukraine since the invasion started on Feb. 24.

“We remain united in our support of Ukraine,” U.S. Defense Secretary Lloyd Austin said as he arrived at an emergency meeting of NATO defence ministers in Brussels. “We support their ability to defend themselves and will continue to support them.”

NATO countries will continue to deliver weapons to Ukraine even as those deliveries could become the target of Russian attacks, Dutch defence minister Kajsa Ollongren told reporters, adding: “Ukraine has the right to defend itself.”

Ukraine is not a member of NATO. Although it has repeatedly said it wants to join to benefit from its protection, Kyiv said on Tuesday it understood it does not have an open door to NATO membership and was seeking other types of security guarantees.

Ministers will also hear from their Ukrainian counterpart Oleksii Reznikov, who is expected to plead for more weapons from individual NATO countries, as Russian attacks on Ukraine’s cities continue and the Russian military seeks control of Kyiv.

Ahead of a summit of NATO leaders on March 24, NATO defence ministers are also set to tell military commanders at Wednesday’s meeting to draw up plans for new ways to deter Russia, including more troops and missile defences in eastern Europe.

While at least 10 of NATO’s biggest member states, including the United States, Britain and France, have deployed more troops, ships and warplanes to its eastern flank and put more on stand-by, the alliance must still consider how to face up to a new security situation in Europe over the medium term.

“We need to reset our military posture for this new reality,” NATO Secretary General Jens Stoltenberg said on Tuesday. “Ministers will start an important discussion on concrete measures to reinforce our security for the longer term, in all domains.”

Russian missiles hit a Ukrainian base near the border with NATO member Poland on March 13, bringing the invasion right up to NATO’s doorstep.

Those missiles were fired from Russia, the United States has said, underscoring Moscow’s ability to hit NATO’s eastern allies. The United States has also warned of undefined consequences for Moscow if Russia were to launch a chemical attack in Ukraine.

NATO, founded in 1949 to contain a military threat from the Soviet Union, is not treaty-bound to defend Ukraine. But it must defend its 30 allies.

However, diplomats say NATO wants to avoid directly stating its plans, or what would trigger its “Article 5” collective defence pledge, saying “strategic ambiguity” is also a defensive instrument against any Russian aggression.

“The surprise for (Russian President Vladimir) Putin was the West was so united. He didn’t believe that. He has the wrong picture about western countries,” Estonian Defense Minister Kalle Laanet said as he arrived at the NATO meeting.

“We can’t be afraid, we have to stay calm, because Putin would like to see that everybody is afraid.”