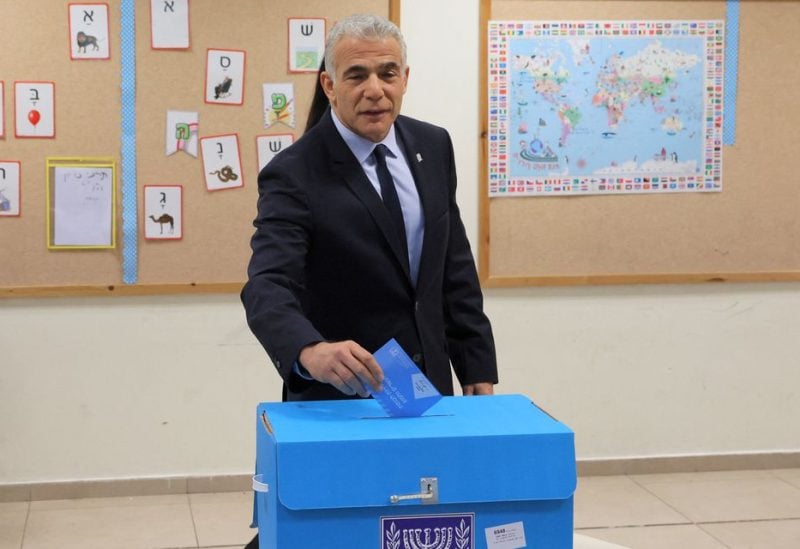 Israeli Prime Minister Yair Lapid casts his vote at a polling station in Israel's coastal city of Tel Aviv in the coutnry's fifth election in four years on November 1, 2022. - Lapid urged the electorate to cast their ballot after voting in an election that might see veteran leader Benjamin Netanyahu making a comeback alongside far-right allies. Photo by JACK GUEZ/Pool via REUTERS

Former Israeli Prime Minister Benjamin Netanyahu appeared to be well-positioned to return to power after exit polls after Tuesday’s election showed his right-wing bloc heading for a narrow majority, boosted by a strong showing from his far-right allies.

According to Israeli television exit polls, Israel’s longest-serving prime minister, who is on trial on corruption charges that he denies, was poised to win 61-62 seats in the 120-seat Knesset.

The early exit polls may differ from the final result of the election, which is not expected until later in the week. But the results pointed to a strong showing by the right, which had been seen falling just short of a majority.

Israel’s fifth election in less than four years exasperated many voters but turnout was nonetheless reported at the highest levels since 1999.

The campaign was shaken up by far-right firebrand Itamar Ben-Gvir and his ultra-nationalist Religious Zionism list, now poised to be the third-largest party in parliament after surging in from the political margins.

Security on the streets and soaring prices topped the list of voter concerns in a campaign triggered by defections from centrist Prime Minister Yair Lapid’s unlikely ruling coalition of right-wing, liberal and Arab parties.

But policy issues have been overshadowed by the outsized personality of Netanyahu, whose legal battles have fed the stalemate blocking Israel’s political system since he was indicted on bribery, fraud and breach of trust charges in 2019.

Netanyahu, 73, has been counting on support from Ben-Gvir and fellow far-right leader Bezalel Smotrich, who have moderated some extreme positions but still call for anyone deemed disloyal to Israel to be expelled from the country.

The prospect of a government including Ben-Gvir, a former member of Kach, a group on Israeli and U.S. terrorist watchlists, and who was once convicted for racist incitement, risks alarming allies including Washington.

The campaign, which opened weeks after a brief conflict with the militant Islamic Jihad group in Gaza in August, has also unrolled against a backdrop of increasing violence in the occupied West Bank, with near-daily raids and clashes.

Lapid, whose camp was poised to take 54-55 seats, according to the polls, had campaigned on his stewardship of Israel’s strong economy as well as diplomatic advances with countries including Lebanon and Turkey but it was not enough to stop the right.