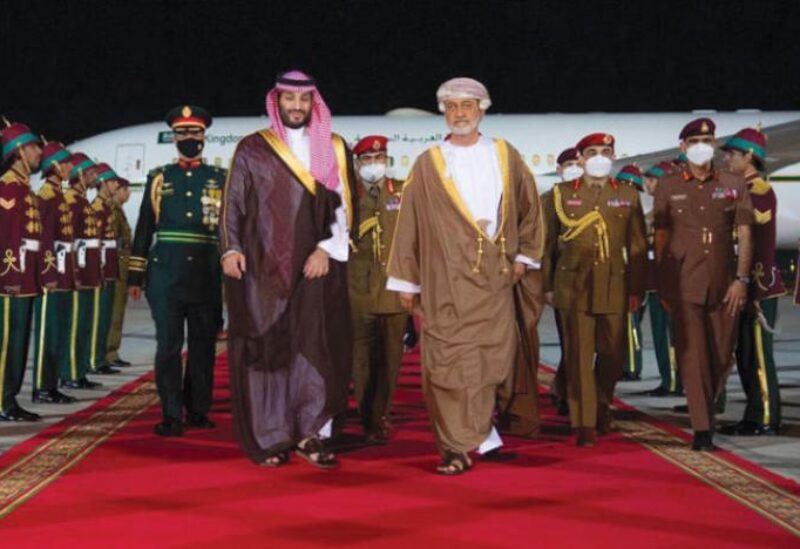 Saudi Crown Prince Mohammad bin Salman arrived in Oman on Monday as part of an official Gulf tour. His arrival in the Omani capital, Muscat, is expected to give a new push for Saudi-Omani relations.

He was received at the airport by Oman’s Sultan Haitham bin Tariq, who wished the Crown Prince and the accompanying delegation a pleasant stay in Oman.

The Crown Prince’s first official visit to the Sultanate comes in light of growing bilateral relations between the two countries. It chiefly aims to strengthen relations and discuss the latest regional and international developments and issues of common interest.

Several areas and aspects of common interest will be discussed during this visit, reported the Oman News Agency.

What will be tackled serves the interests of the two countries and works to achieve the aspirations and hopes of the Omani and Saudi peoples for a more prosperous and developing future.

On the sidelines of the visit, Saudi Arabia and Oman signed 13 memoranda of understanding (MoUs) in different sectors.

The deals were signed by firms owned by Oman Investment Authority (OIA) with their Saudi counterparts, the official Oman News Agency reported.

OQ Group, a global energy provider based in Oman, signed three of the agreements, the first of which was with ACWA Power and Air Products in the fields of petrochemicals, renewable energy and green hydrogen. The second, relating to oil storage, was signed with Saudi Aramco, and the third, involving development of Oman’s Duqm Petrochemical Complex project, with SABIC.

Omran Group signed a memorandum with the Saudi Dar Al-Arkan Real Estate Development Company for the development of the Yetti Beach in Oman. Omran is described as creating sustainable and authentic tourism assets, lifestyle communities and destinations designed to drive economic growth and contribute to the diversification of the economy.

The Saudi Tadawul Group and the Muscat Securities Market signed a memorandum for cooperation with the operation of the stock exchange and the dual listing of companies.

Oman-based Asyad, a logistics group, signed an agreement with Saudi Bahri, a transportation and logistics company, while Minerals Development Oman signed a deal with the Kingdom’s Maaden Phosphate Co. to boost cooperation in the mining sector.