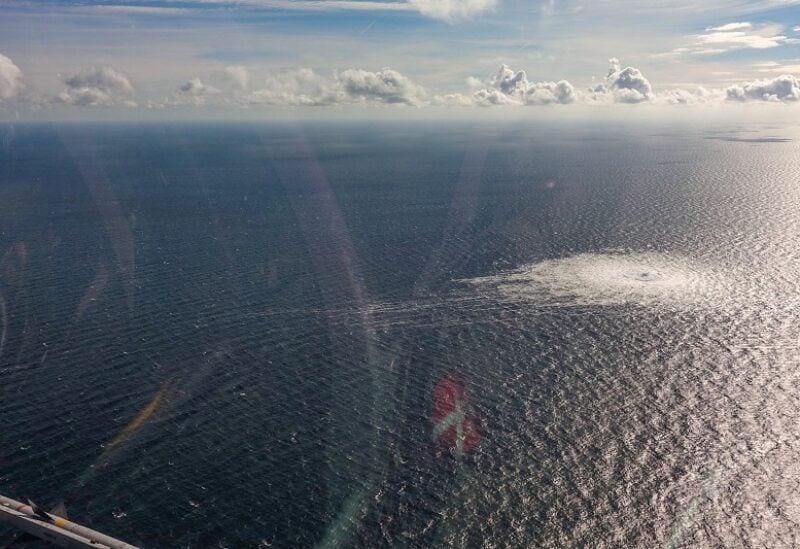 Gas leak at Nord Stream 2 as seen from the Danish F-16 interceptor on Bornholm, Denmark September 27, 2022. Danish Defence Command/Forsvaret Ritzau Scanpix/via REUTERS ATTENTION EDITORS - THIS IMAGE WAS PROVIDED BY A THIRD PARTY. DENMARK OUT. NO COMMERCIAL OR EDITORIAL SALES IN DENMARK.

European leaders believed that sabotage was the reason behind the leaks as the major pipelines transporting natural gas from Russia to Europe were majorly impacted. They launched an investigation into the explosions near the Nord Stream pipelines which resulted in major leaks into the Baltic Sea.

While Nord Stream 1 reported leaks, the almost defunct Nord Stream 2 experienced a sudden drop in pressure overnight. According to the German geological research center GFZ, the leaks took place near the Danish island of Bornholm and the seismograph recorded major spikes twice on Tuesday.

“There are two leaks on Nord Stream 1 – one in Swedish economic zone and one in Danish economic zone. They are very near each other,” Swedish Maritime Administration (SMA) told Reuters.
Danish Prime Minister Mette Frederiksen was quick to react to the situation as he described the Nord Stream leaks as “deliberate acts” and added that “We are not talking about an accident.”
European commission president Ursula Von der Leyen also echoed similar sentiments.
“Any deliberate disruption of active European energy infrastructure is unacceptable and will lead to the strongest possible response,” Von der Leyen told reporters according to Reuters.

Polish prime minister Mateusz Morawiecki linked the leaks to the ongoing Ukraine crisis and told The Guardian that this “probably marks the next step of escalation of the situation in Ukraine”.
With the conflict in Ukraine showing no signs of ending, fingers have been pointed toward Russia for trying to weaponise the energy supply once again by causing disruption to the pipelines.

Russia did not react to the accusations as Kremlin spokesperson, Dmitry Peskov, said that the event was “very concerning” and added that “no option can be ruled out right now”.

“This is very concerning news. Indeed, we are talking about some damage of an unclear nature to the pipeline in Denmark’s economic zone,” he said in the official briefing.