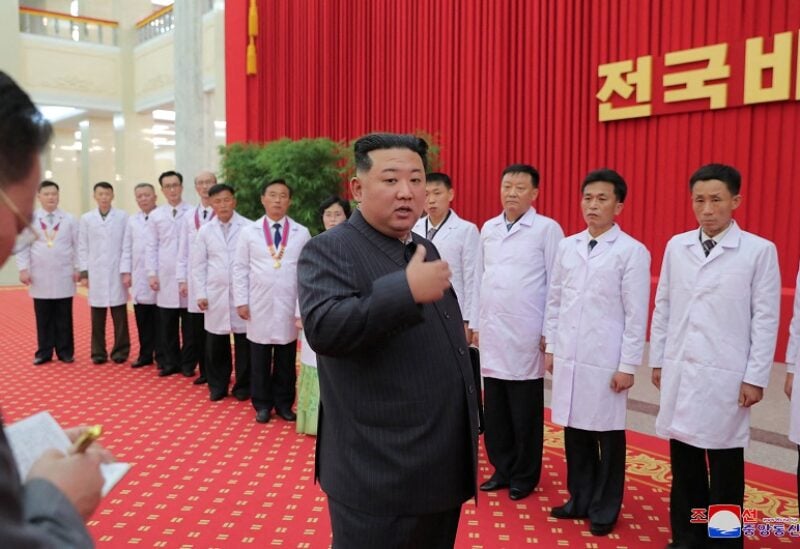 Ordering preventive measures eased, just three months after acknowledging an outbreak, North Korean leader Kim Jong Un has declared victory over COVID-19, claiming the country’s widely disputed success would be recognized as a global health miracle.
The North’s official Korean Central News Agency also reported Thursday that Kim’s sister said her brother had suffered a fever and blamed the North Korean outbreak on leaflets flown from across the border from South Korea, while warning of deadly retaliation.
Some experts believe North Korea has manipulated the scale of the outbreak to help Kim maintain absolute control of the country amid mounting economic difficulties. They believe the victory statement signals Kim’s aim to move to other priorities but are concerned his sister’s remarks portend a provocation.
South Korea’s Unification Ministry, which handles inter-Korean affairs, issued a statement expressing strong regret over North Korea’s “extremely disrespectful and threatening comments” that were based on “ridiculous claims” about the source of its infections.
Since North Korea admitted to an omicron outbreak of the virus in May, it has reported about 4.8 million “fever cases” in its population of 26 million but only identified a fraction of them as COVID-19. It has claimed the outbreak has been slowing for weeks and just 74 people have died.
“Since we began operating the maximum emergency anti-epidemic campaign (in May), daily fever cases that reached hundreds of thousands during the early days of the outbreak were reduced to below 90,000 a month later and continuously decreased, and not a single case of fever suspected to be linked to the evil virus has been reported since July 29,” Kim said in his speech Wednesday, according to KCNA.
“For a country that has yet to administer a single vaccine shot, our success in overcoming the spread of the illness in such a short period of time and recovering safety in public health and making our nation a clean virus-free zone again is an amazing miracle that would be recorded in the world’s history of public health,” he said.
For Kim to declare victory against COVID-19 suggests that he wants to move on to other priorities, such as boosting a broken and heavily sanctioned economy further damaged by pandemic border closures or conducting a nuclear test, said Leif-Eric Easley, a professor of international studies at Ewha Womans University in Seoul.
South Korean and US officials have said North Korea could be gearing up for its first nuclear test in five years amid its torrid run of weapons tests this year that included its first demonstrations of intercontinental ballistic missiles since 2017.
The provocative testing activity underscores Kim’s dual intent to advance his arsenal and pressure the Biden administration over long-stalled negotiations aimed at leveraging its nukes for badly needed sanctions relief and security concessions, experts say.
Kim Jun-rak, a spokesperson for South Korea’s Joint Chiefs of Staff, said Thursday the South Korean military was maintaining firm readiness and prepared for “various possibilities” of North Korean provocations.
The bellicose rhetoric of Kim’s sister, Kim Yo Jong, is concerning because it indicates she will try to blame any COVID-19 resurgence on the South and is also looking to justify North Korea’s next military provocation, Easley said.
North Korea first suggested in July that its COVID-19 outbreak began in people who had contact with objects carried by balloons flown from South Korea — a questionable and unscientific claim that appeared to be an attempt to hold its rival responsible.
Activists for years have flown balloons across the border to distribute hundreds of thousands of propaganda leaflets critical of Kim, and North Korea has often expressed fury at the activists and at South Korea’s leadership for not stopping them.
During Wednesday’s meeting, Kim Yo Jong reiterated those claims, calling the country’s virus crisis a “hysteric farce” kicked off by South Korea to escalate confrontation. She claimed that her brother had suffered fever symptoms and praised his “energetic and meticulous guidance” for bringing an “epoch-making miracle” in the fight against COVID-19.
“(South Korean) puppets are still thrusting leaflets and dirty objects into our territory. We must counter it toughly,” she said. “We have already considered various counteraction plans, but our countermeasure must be a deadly retaliatory one.”
Kim Yo Jong’s reference to Kim Jong Un’s illness wasn’t further explained.
Outside experts suspect the virus spread after North Korea briefly reopened its northern border with China to freight traffic in January and surged further following a military parade and other large-scale events in Pyongyang in April.
In May, Kim prohibited travel between cities and counties to slow the spread of the virus. But he also stressed that his economic goals should be met, which meant huge groups continued to gather at agricultural, industrial and construction sites.
At the virus meeting, Kim called for the easing of preventive measures and for the nation to maintain vigilance and effective border controls, citing the global spread of new coronavirus variants and monkeypox.