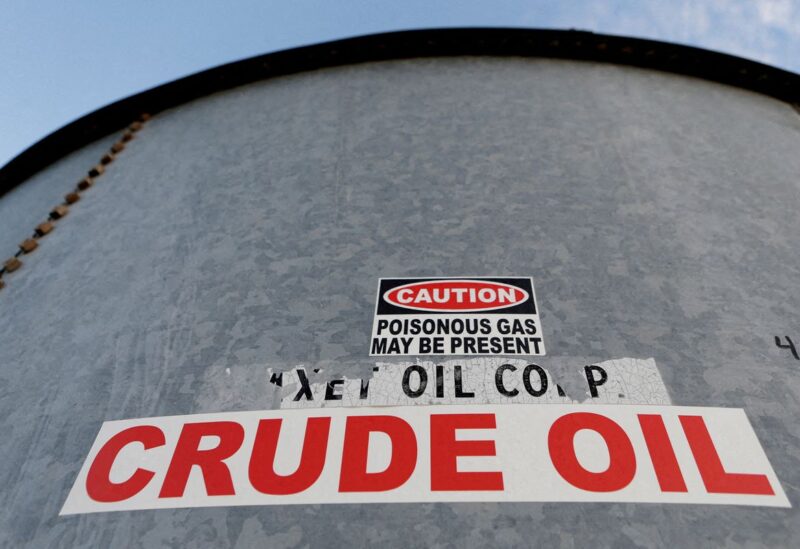 Sticker reads crude oil on the side of a storage tank in the Permian Basin in Mentone, Loving County, Texas, U.S. November 22, 2019. REUTERS/Angus Mordant

Oil prices rose about 1.5% after falling to a six-month low on Wednesday, as a sharper-than-expected drawdown in US crude stocks outweighed concerns about rising Russian output and exports, as well as recession fears.

US crude stocks fell by 7.1 million barrels to 425 million barrels in the week ending Aug. 12, according to Energy Information Administration (EIA) data, compared to analysts’ forecasts for a 275,000-barrel drop in a Reuters poll.

“It was expected to be a friendly report and it was pretty much across the board. Some of those demand destruction concerns that the market was going through seem to be alleviated a little bit,” said Phil Flynn, an analyst at Price Futures group.

The American Petroleum Institute had on Tuesday flagged a 448,000 barrel draw in crude stocks and 4.5 million barrels in gasoline inventories, according to sources.

Oil has soared in 2022, coming close to an all-time high of $147 in March after Russia’s invasion of Ukraine.

However, Russia has started to gradually increase oil production after sanctions-related curbs and as Asian buyers have increased purchases, leading Moscow to raise its forecasts for output and exports until the end of 2025, an economy ministry document seen by Reuters showed.

Russia’s earnings from energy exports are expected to rise 38% this year partly due to higher oil export volumes, according to the document, in a sign that supply from the country has not been affected as much as markets originally had expected.

The prospect of recession has also more recently weighed on oil prices. British consumer price inflation jumped to 10.1% in July, its highest since February 1982, intensifying a squeeze on households, and pushing oil prices lower earlier in the day.

“There are growing downside risks as a result of the growth outlook and ongoing uncertainty around Chinese COVID restrictions,” said Craig Erlam of brokerage OANDA.

An exodus of participants, especially hedge funds and speculators, has made daily price swings far greater than in previous years.

On the oil supply front, the market is awaiting developments from talks to revive Iran’s 2015 nuclear deal with world powers, which could eventually lead to a boost in Iranian oil exports.

The European Union and United States said on Tuesday they were studying Iran’s response to what the EU has called its “final” proposal to save the deal.

Analysts at Goldman Sachs said a return of Iranian crude supply would reduce their 2023 forecast by $5-10 per barrel from $125 per barrel.