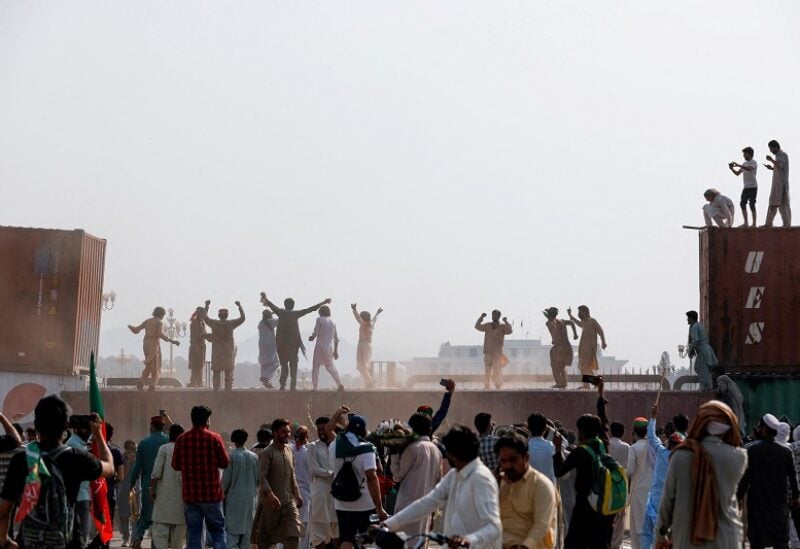 Supporters of the Pakistan Tehreek-e-Insaf (PTI) political party react after they remove a shipping container, used to block the road leading to Red Zone, during a protest march called by ousted Prime Minister Imran Khan in Islamabad, Pakistan May 26, 2022. REUTERS/Akhtar Soomro TPX IMAGES OF THE DAY

Warning of a civil war, Pakistan’s ousted prime minister Imran Khan said on Thursday, that the country would “break into pieces” if the establishment didn’t announce elections soon.

In an interview to local a television channel Bol News, Khan, who was ousted through a no-confidence motion in April, said, “We will see if they allow us to go towards elections through legal and constitutional means otherwise this country will go towards [a] civil war.”
The Pakistan Tehreek-e-Insaf (PTI) party chief further said there was “no question” of returning to the National Assembly as that would “mean accepting the conspiracy” that had removed his government.

Sharply reacting to Khan’s statements, PM Shehbaz Sharif tweeted, “While I am in Turkey inking agreements, Imran Niazi is making naked threats against the country. If at all any proof was needed that Niazi is unfit for public office, his latest interview suffices. Do your politics but don’t dare to cross limits & talk about division of Pakistan.”

Ever since removed from office earlier this year, Khan had been demanding fresh elections claiming that his government was ousted because of a so-called conspiracy hatched by US.